At today’s gold commodity price, a cache of riches stored in a strong-room near the centre of the city of Košice, eastern Slovakia,  would be worth nearly half a million dollars.

This is no ordinary gold, however. It is the Golden Treasure of Košice, an extraordinary find during a house renovation in the city’s high street in 1935, and its 17th century provenance means no financial value can be attached to it. 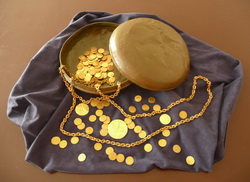 A wealth of coins was found in hidden casket. Photo copyright www. visitkosice.eu

The treasure is open to public view in a magnificent, technology-aided display in a vault in the Východoslovenské Múzeum (East Slovak Museum), which has locked in place all the appropriate security measures. Visitors are closely monitored as they enter the special safe-deposit room.

Much of the 11.5 kg of gold unearthed is a dream come true for numismatists: 2, 920 gold coins, ducats and dubloons. Besides this, there are three gold medals and a 99% gold Renaissance chain which is 2.14 m in length.

All this cornucopia had been secreted in a casket in a lordly house shortly after 1679, presumably for safekeeping during anti-Habsburg uprisings.

The horde was taken on tour for five years to museums in Bratislava, Prague, Budapest, Krakow and Ostrava before returning to its home city of Košice in September 2013.

Curators at the East Slovak Museum say what is one of the most significant coin finds in Europe is remarkable in having remained intact. Workers found the collection in a copper receptacle – in the shape of a loaf of bread – engraved with animal motifs during the reconstruction of a mansion in the fashionable high street of Košice.

The date of the newest coin, struck during the reign of Leopold I, indicates that the treaure was squirelled away soon after 1679. This would be in time to prevent its seizure by rebel forces led by Imre Thököly who occupied Košice in 1682. 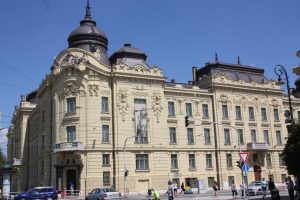 One of the fine buildings of East Slovakia Museum.

Experts have been delighted not just by the huge variety of coins, but by their geographical spread. The examples originate the mints of many countries, and the majority are Hungarian, Transylvanian and Dutch.

There are  is Bohemian, Silesian, Polish, German, Danish, Swedish, Italian, Austrian, Salzburg, and Spanish money, and a copy of an ancient Thracian gold stater, the type of unit that underpinned trade between Greek city states.

The oldest coins are gold florins of Sigismund of Luxemburg, who was variously ruler of Brandenburg, Hungary, Croatia and Bohemia, and Holy Roman Emperor. The florins were minted between 1402 and 1404. The Leopold I ducats were produced at the Kremnica Mint. Leopold was Holy Roman Emperor and king of Hungary, Croatia and Bohemia. The mint of the central Slovakian town of Kremnica, known for its gold mines, was established in 1328, and after all this time remains a source of plaques, tokens, badges, pendants, tie pins, stamps, labels, awards, mayoral chains, and many other articles. 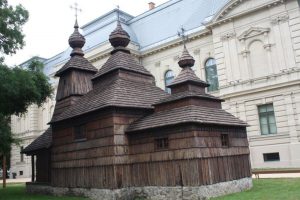 Among the medals in the Košice Treasure is an equestrian specimen of Ferdinand I dating from 1541.

It is hardly surprising that currency of all nations surfaced in such magnificent quantities in Košice. The city was a stopping-off point on the long trade route from the Aegean to the Baltic Seas, and a centre of commerce for the farm produce of the Kingdom of Hungary.

Košice’s links across the continent were reinforced in a modern setting, when the city was chosen as European Capital of Culture 2013 along with Marseilles. It put on some 360 events and has kept up a brisk pace of exhibitions and performances in 2014, with the benefit of the new cultural infrastructure improvements.

Košice enjoyed in 2013 a 20% growth in overnight visitor stays, to reach a figure of 245, 000. Its international airport is 20 minutes south of the city centre and its routes include connections with London (Luton); while Budapest airport is three hours away by road. 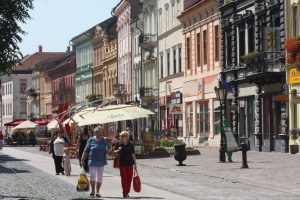 An estimated further 450, 000 tourists in 2013 spent a day in the city, calling in from elsewhere in Slovakia or from neighbouring countries, especially Hungary, or en route to such destinations as Croatia. The largest group of tourists was from Germany, with many others from Hungary, Poland, and the Czech Republic. The one-day tourists were, unsurprisingly, from nearby Hungary, and many visited from Bratislava and other Slovakian centres.

Aside from a thirst for culture, they were able to indulge in the offerings from micro-breweries, a phenomenon that is enjoying a revival; to sample some of the first commercial cider to be produced in the city environs; and of course to delight in Tokaj and other locally-produced wines.Hlavná ulica (main street) in Košice. 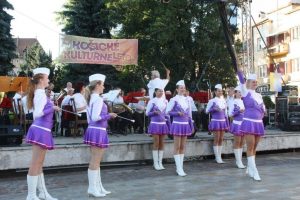 It is not immediately apparent to strollers in a historic centre blessed usually in summer by plenty of sunshine, butKošice is an important industrial centre. The pre-1950s population of 50, 000 grew substantially within two to three years upon the opening of the plant originally called East Slovak Ironworks, and now known as US Steel Košice. These days, the information technology sector also occupies a high position in the commercial base. These industries go to make Košice, with a population of 250, 000, by far the second largest city in the country after the capital, Bratislava, 400 km distant.