Slovak Sea shimmers as “the land of sun and water” 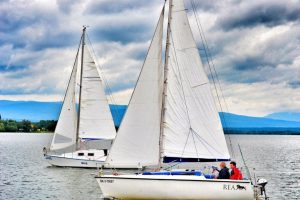 Yachting on the Slovak Sea. Photo courtesy of www. kosiceregion.com

Slovak Sea shimmers as “the land of sun and water”,  By James Brewer

Every nation likes to be beside the sea – and countries that are landlocked wish that they were.
Thus Slovakia, cradled in the European landmass, delights in what is called in English the Slovak Sea, a 33 sq km expanse of water created in the 1960s for industrial purposes, and now a popular summer destination.

One might compare it to the place in the national psyche that is occupied by Lake Balaton in Hungary. Built as an anti-flood reservoir, the biggest man-made lake in Slovakia is known as Zemplinská Šírava, after the county of Zemplin, which enjoys the highest temperatures in the country, with the sun shining strongly into October. Tourist officials say it is “the land of sun and water.” 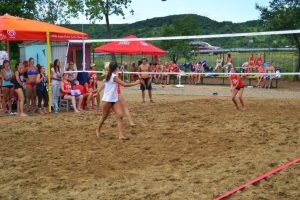 Fun and games by the Slovak Sea. Photo courtesy of www. kosiceregion.com

Its scenic setting is in a place once called the “mud of Vihorlat.” From that unappealing start, it was transformed into an expanse of water with average depth of 9.5 m, and maximum depth of 14 m.
The shallow Zemplinská Šírava was a big attraction in the 1970s and 1980s when many Slovaks found it difficult to travel abroad. While the time is over when the number of visitors in a season reached 1m, the resorts along the northern shore are pulling in holidaymakers for boating, nautical sight-seeing, fishing (for perch, pike and carp), lazing on the beach and hiking in the volcanic Vihorlatské hills. Several outdoor swimming pools are sited next to the lake, and the ruins of the Viniansky castle offer a splendid view over the area. 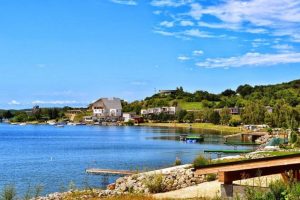 Klokočov is a pilgrimage destination for Greek Catholics who come to gaze in the Church of the Ascension of St Mary at a replica of a painting of the Virgin Mary which is said to have shed tears in 1670 after being desecrated by heretics. The original icon was painted on wood.

The eastern portion of the lake is a protected ornithological reserve, with close to 100 species of waterfowl recorded. Thirty minutes’ drive away is another volcanic lake Morské oko (Eye of the Sea), a protected nature reserve. 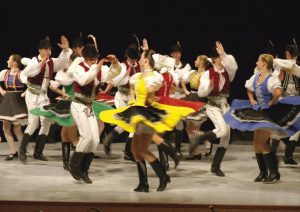 The nearest resort on the Slovak Sea is only 3km from the city of Michalovce, which with 40, 000 people is the second largest city in the Košice region. The city, named after the Archangel St Michael, is in 2014 marking the 770th anniversary of its first mention in written records. Michalovce is an attractive place in its own right, with a museum and art gallery housed in a fine mansion, and a pleasant pedestrian shopping centre with a ‘singing fountain.’ 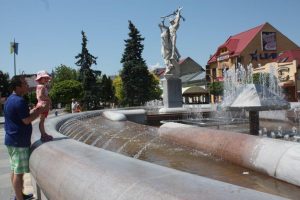 Cooling off at Michalovce’s singing fountain.

Interestingly, the Greek Catholic Church has long had a following there, although four out of 10 people follow the Roman Catholic religion.  Before the terrible purges during World War II, some 30% of the population was Jewish. Among historical characters associated with Michalovce is Tsar Presian II of Bulgaria, who reigned in 1018 and is thought to be have been buried in the city.

Presian was a member of the royal house known latterly as the Cometopuli, which appears to refer to an area called the Macedonian Empire by the late historian George Ostrogorsky, an expert on the Byzantine world. 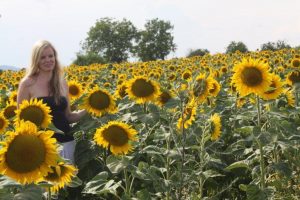 Sanctions on the West – Russia reacts

Ím skipper from Sirava, thank you!