Ilse reveals her other side 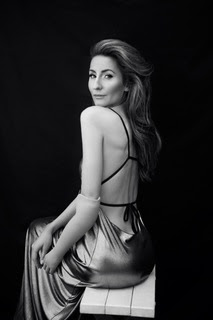 “She is drop dead gorgeous with an incredible voice. ILSE grew up without a left arm, but with one big dream: to become a singebior. Today she scores an internet hit and fans world wide with her song ‘I Am Human’.” HET NIEUWSBLAD

“Singer-songwriter Ilse Gevaert could be about to create a musical earthquake not managed by a Belgian since her countryman Adolphe Sax invented the saxophone in 1841. Her forthcoming album ‘I Am Human’ could be the best biggest thing to have come out of Belgium after the women’s tennis rivalry between Justine Henin and Kim Clijsters.” SPALDING GUARDIAN, UK
“Be less like the others, and more like yourself.” ~ ILSE
ILSE, the Brooklyn-based, Belgian-born singer who’s setting the international pop charts ablaze, is not afraid to show her full and true self. As her star continues to rise and more people around the world become familiar with her sound, image, and message, ILSE shows how pure honesty can be the most disarming, powerful, and positive force an artist can have. In simply being real, this pop artist challenges the narrow and rigid beauty standards in today’s music industry, turning what some might mistakenly perceive to be a weakness into a source of pride and strength. Read more here: www.ilsemusic.com.
“She used to hit bullies on the head with her prosthesis. Today her weapon is love.”
But that pride and strength was hard earned. Her prosthetic arm, which during her childhood was a source of embarrassment that also served as a weapon against bullies, has through years come to symbolize for ILSE self-love, acceptance, strength, and perseverance. After an uplifting call-to-arms for diversity and pluralistic acceptance in her first single “I Am Human“, ILSE is making her case back with a bold and futuristic new single “Behind the Scenes”, about the search for love in the cavernous and indifferent big city and the desire to make a real connection. In the music video she shows her prosthetic arm in all its glory, accepting her imperfection and embracing it as a part of her being. ILSE has gained over 100, 000 online followers and over 750, 000 views on her YouTube channel. Additionally, the international press is paying increasing attention to this rising star by featuring ILSE in full-length interviews and music reviews. For press releases, click here:www.ilsemusic.com/press.html. In response, ILSE is celebrating her growing musical family by starting an official fan club called “The Lovers” which is aimed at spreading love into the world through music.
“Strength doesn’t come from a smooth journey. It comes from overcoming obstacles.” ~ ILSE
ILSE’s story has been anything but a straight and narrow road and she has made a demanding journey through poverty and rejection in the competitive music industry. Read more here: www.ilsemusic.com/bio.html. Today she is armed with a crack team of music production whizzes behind the consoles in the likes of Grammy-nominated Producer/Musician/Engineer Joshua Valleau (John Legend, James Blake, BBC), Columbia Records, Sony UK Composer/Producer Sebastiaan Vandevoorde (Moonlight Matters, Arches, Villa; remixed artists such as Adele, Lana Del Rey, Ellie Goulding, Moby) and Violinist/Arranger/Composer Juliette Jones of Jules & The Dirty Collective (Florence + The Machine, Pharrell Williams, Aretha Franklin, Janelle Monae, J.Cole, Nicki Minaj), delivering a sound like no other. With its bass-heavy, lavishly cinematic sound and undeniable charm, ILSE’s music flirts with an assortment of musical eras while steering us into the future. Hers is a music made for both the soul the mind – music made for you to feel. Brace yourselves to be moved (and shaken) by something audaciously and unapologetically fresh.
Don’t get left out: watch the latest video (below), take in the wonderment and feel whole again; then give us a ring.
BelgiumIlse Gevaert
0 comment
0
FacebookTwitterLinkedinEmail