16 US States at high earthquake risk 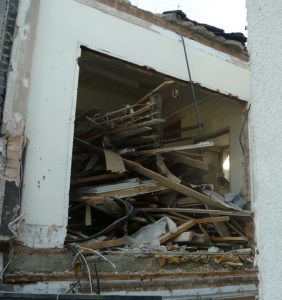 Thu 14 Aug 2014 – Updates to the recent US geological survey show that certain areas face a higher threat of earthquakes than previously thought. ( source: Lloyd’s of London)

The magnitude 6.1 earthquake which hit China’s Yunnan province on 3 August 2014 is a reminder of why some governments are keen to better understand earthquake hazard in order to mitigate the risk.

This is the objective of the US Geological Survey (USGS), which released its latest hazard maps for the US in July 2014.

“USGS earthquake science is vital because you can’t plan for earthquakes if you don’t know what you are planning for, ” said Mark Petersen, chief of the USGS National Seismic Hazard Mapping Project, in a statement. “Our nation’s population and exposure to large earthquakes has grown tremendously in recent years. The cost of inaction in planning for future earthquakes and other natural disasters can be very high, as demonstrated by several recent damaging events across the globe.”

Earthquake science is constantly evolving as new research improves understanding. In recent years there have been significant earthquake events around the world. Such devastating catastrophes offer scientists the ability to better understand how earthquakes behave.

Geoscientists have recently studied the phenomenon of earthquake “clustering” (where one earthquake triggers another further down a fault line) and the impact of secondary perils, such as tsunami and liquefaction. Much of this insight has informed the latest incarnation of USGS hazard maps.

Earthquakes in Alaska, Mexico and New Zealand have offered insight into more complex ruptures and how faults can link together. This insight was applied to California by USGS.

The magnitude Tohoku earthquake and a M8.2 earthquake off the coast of Chile in 2014 ruptured along subduction zones similar to the Pacific Northwest zone.

And the M7.9 Wenchuan earthquake in China in 2008 provided many new records of shaking that are similar to anticipated future earthquakes in the western US.

Learning from these events has been shared throughout the scientific and risk modelling communities. “As our understanding of earthquake risk continues to evolve, it is imperative that our models reflect the best available science, ” says Nick Beecroft, Lloyd’s manager of emerging risks and research.

“For complex and dynamic perils such as earthquakes, models provide an invaluable tool, but we also have to apply underwriting expertise to ensure that we achieve the most accurate valuation of risk.

“One of the key challenges is to ensure that lessons are learned from catastrophic events, ” he continues. “The 2011 Tohoku earthquake-generated tsunami off Japan led to a reassessment of the methods for tsunami risk assessment, for instance. The critical challenge for insurers in communicating risk assessment based on geoscience is the need to encourage individuals and organisations to prepare for events outside their immediate experience.”

Every six years, the USGS updates its hazard maps to incorporate the latest geoscience research. Catastrophe modelling agency RMS, among others, was involved in the latest USGS maps. The earthquake models the insurance industry uses to manage its exposures and price the risk are likely to change as a result of the USGS updates.

“With the incorporation of new science or data, sometimes the hazard expectations increase and sometimes they decrease, ” explains Patricia Grossi, senior director, model product management, RMS. “Incorporating the 2014 USGS map release into the RMS model is expected to increase losses in some cases and decrease losses in some cases. The expectation is that it will have an impact [on the models] but the full range is yet to be determined.”

“Where the USGS is incorporating higher magnitude events for off-fault events to M8.0, this change will likely increase losses on the ‘tail’ of an exceedance probability curve, ” she adds. “But it’s also likely to have very little impact on the average annual loss estimates that are used for pricing.”

The USGS hazard map reveals that 16 states are at a high risk of damaging earthquakes over the next 50 years (these have all historically experienced earthquakes with a magnitude 6 or higher).

Several areas have been identified as being capable of having the potential for larger and more powerful earthquakes than previously believed, due to more data and updated earthquake models.

For the US as a whole, earthquake hazard is especially high along the west coast, intermountain west and in several active regions of the central and eastern US, such as near New Madrid, Missouri, and new Charleston, South Carolina.

New Madrid was the site of the most powerful earthquakes to hit the eastern US in recorded history. The 1811-1812 series of quakes were felt strongly over a wide area (roughly 130, 000 square kilometres) and moderately over an area of nearly three million kilometres.

Some of the most prominent changes to the USGS earthquake maps include:

The potential for larger and more damaging earthquakes along the East Coast than previously thought. A magnitude 5.8 earthquake that struck Virginia in 2011 offered scientist more insight;

However, in New York City, the maps indicate a slightly lower hazard for tall buildings than previously believed;

The New Madrid Seismic Zone has been identified as having a larger range of potential earthquake magnitudes and locations than previously identified. This is a result of new research, part of which was compiled by the Nuclear Regulatory Commission;

In California, earthquake hazard extends over a wider area than previously thought. Faults were recently discovered for San Jose, Vallejo and San Diego; and

New research on the Cascadia Subduction Zone (a plate boundary that stretches from Vancouver Island in Canada to northern California) resulted in higher estimates of earthquake magnitude, up to 9.3.