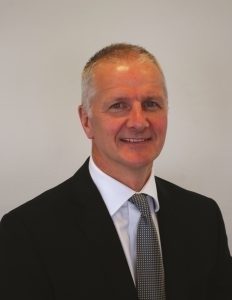 Chris Baldwin is the newest member of the International Marine Contractors Association (IMCA) Secretariat. He has joined the Team as a Technical Adviser following a short secondment from the Royal Navy. The association has a strong team of eight Technical Advisers working with Jane Bugler, IMCA’s Technical Director.

Chris has spent 29 years in the Royal Navy and most recently held a position in the UK MoD’s Defence Safety and Environment Authority, as the Diving Regulator and Superintendent of Diving. His career has encompassed a range of Warfare Officer (which equates to Seaman or Deck Officer in the merchant marine) sub-specialist trades, including as a British Sea Fisheries Officer, a Mine Warfare and Clearance Diver (MCDO), and a Principal Warfare Officer. He has served at sea as an Officer of the Watch, Operations Officer and Executive Officer (equates to Chief Officer/Mate) onboard destroyers, frigates, patrol and mine warfare vessels. He has also held diving command and training posts ashore. His career path has given him a wide maritime experience including: DP, AUV and ROV operations; ship and Offshore Installation security; competency training, safety auditing and most recently commercial diving.

“We are delighted to welcome Chris as something of an all-rounder role in the Secretariat, ” says IMCA’s CEO, Chris Charman. “He is working mainly in the Marine and Remote Systems and ROV Divisions; acting as Secretary for the Remote Systems & ROV Division Management Committee; and manages the CMID (Common Marine Inspection Document) scheme. He leads on maritime security business and, after completing the basic DPO course, also assists in the DP area. He completed an MSc in Project Management in 2004 and holds vocational qualifications in Occupational Health and Safety, Accident Investigation and is a qualified OHSAS 18001 Lead Auditor.  He is ideal for the post – a round peg in the proverbial round hole, and has already made himself an invaluable team member.”

Eager to get out to the ‘frontline’ of the marine contractor domain, to meet the people working in this dynamic and varied business environment, Chris Baldwin says: “I really want to understand the issues faced by the people working in the industry so that while I am here in the Secretariat I can help ensure that we are able to provide the best support, advice and guidance we can to IMCA members.

“While my background is from the military I have been pleasantly surprised at how the principles and concepts of maritime operations are almost the same in this commercially focussed environment. Having had to watch every single penny I spent in the defence domain, it is wonderful to be in an environment which, though geared to ensuring value for money, is nevertheless able to resource its activity through proper income generation.

“I must add that I have been made to feel very welcome by everyone I have come across so far, from the Secretariat staff itself to the stakeholders in the various sectors I have been involved with and I am very much looking forward to meeting more in the future. I am starting with three priorities for the year: firstly to produce a revised CMID process; secondly to assist the development of a common ROV operator ‘operational performance’ standard; thirdly to produce security guidance for members based on my many years’ experience of this matter in the RN.”

On leaving the Navy Chris Baldwin has been commissioned into the Royal Naval Reserve (RNR) in the rank of Commander, specifically to oversee the expansion of the RNR Diver Branch as part of the wider expansion of the UK Reserve Forces. The RNR plays a significant role in supporting international maritime trade providing personnel to man the UK Maritime Trade Operations centre in Dubai. Being an RNR officer will ensure that in his technical adviser role for maritime security he will have improved liaison opportunities with national and international security authorities, thereby hopefully bringing added value to IMCA’s membership.