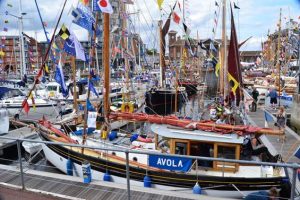 Associated British Ports (ABP) helped Celebrate Ipswich at the weekend as its Ipswich Haven Marina welcomed over 140 visiting yachts for the culmination of the town’s highly successful Maritime Festival.

Visitors included a 40-strong fleet of Old Gaffers – traditional sailing vessels with a particular style of ‘gaff rigging’, some of which can date back to the 19th century. Other highlights of the weekend included historic vessels on Orwell Quay, a V39 wartime steamboat, as well as classic barges and the oldest RNLI lifeboat, the James Stevens No.14. On Saturday evening visitors were treated to a laser lightshow along the marina walls and on Sunday night the weekend was rounded off with a spectacular firework display.

Marina Manager Linda Pipe said: “The weekend was fantastic and we were delighted to be able to offer our support and help showcase not only what a wonderful tourist destination Ipswich has become but how thriving the waterfront really is.

“A great time was had by all and special thanks should go to the team at the marina and to our visitors who helped make the weekend such a success.”

ABP owns and operates the Port of Ipswich as well as two other East Anglian Ports, King’s Lynn and Lowestoft. Combined these ports contribute £340 million to the UK economy each year, support 3, 577 jobs in the region and a further 5, 000 jobs nationally.

Artist in residence appointed to Port of Southampton