Artist in residence appointed to Port of Southampton 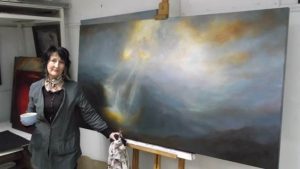 The unique relationship between Southampton and its port is to be captured in oil and canvas as part of the city’s 50th anniversary celebrations.

Lee Campbell, winner of the Painters Stainers Award, will be based at the port for several months and produce artwork across a number of different mediums, including oils, charcoal and graphite. She will take inspiration from the city’s architecture, rich building materials and people as she produces a series of five exclusive pieces.

The project will culminate in the autumn with an exhibition at the port’s Ocean Cruise Terminal.

Lee said: “There are so many links between Southampton and the port, from the buildings that populate it to the animals that call it home. I’m very much looking forward to getting under the skin of Southampton over the coming months and speaking to the people linked to the port who contribute to its rich personality.

”It’s not just the port that will provide my inspiration and I’m excited about getting into the city centre and surrounding areas to meet local people and see what they think links the port with its surroundings. The beauty of oil and charcoal over photography is that I can blend my interpretations with theirs to create something imaginative and thought-provoking.”

Nick Ridehalgh, ABP Director Southampton, said: “There is a special relationship between the city of Southampton and its port. It’s a partnership that has been working successfully for more than 175 years.

“It’s not simply how the port supports 15, 000 jobs, the vast majority of them for local people. Or that it generates £1 billion for the economy, again, most of that in the region. It’s the fact that the port is such an important part of the city and the local community.

“As the city marks this milestone in its history, we wanted to play our part by showcasing the key role the port plays in day-to-day life in Southampton.”

Notes to editors:
About ABP

The most expensive tanker…