Unseen heroes: seafarers win the praise of students who made a film… 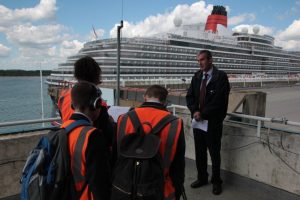 Students interview officials at Southampton for their video production. Photo by Andy Jones.

Unseen heroes: seafarers win the praise of students who made a film called So What’s the Sea Ever Done for Us? By James Brewer

Pupils of the Mountbatten School, Hampshire, live near the coast and near some of the busiest sea-lanes in Britain. Their school has, because of its association with the late Lord Mountbatten, historic maritime connections – which made them determined to remedy their lack of knowledge about the shipping industry and how it provides for people’s everyday necessities.

Six of the students embarked in their school bus for Southampton Docks to make a video that answers the question they posed in its title So What’s the Sea Ever Done for Us? Put together with the help of professional film makers, the video has won the endorsement of industry executives and is now available on YouTube at http://www.youtube.com/user/SeafarersAwareness 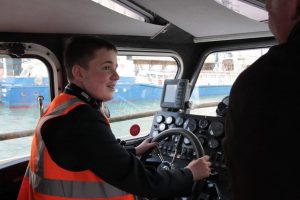 The teenagers start with some rudimentary knowledge of the shipping world – impressions of the Titanic disaster; vague awareness of trade in imports and exports; “it’s the way we get our fish and chips…”

Soon, says one of the pupils, “We realised there was a whole lot we did not know.”

Their school, a comprehensive with some 1, 400 pupils and academy status,  is in Romsey, in the southern Test Valley. It was built on land formerly under the ownership of Earl Mountbatten’s Broadlands Estate, and enjoyed the patronage of Lord Louis until he was assassinated. The school ‘houses’ are named after his ships, Kelly, Lion, Daring, Wishart and Illustrious.Lord Mountbatten’s great-granddaughter, the Hon Alexandra Knatchbull, is current patron of the school. 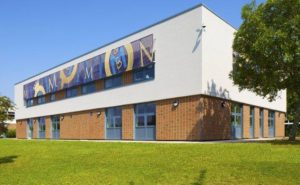 The film was completed in time for Seafarers Awareness Week, June, 21-29, and one of its first screenings was at the Liverpool Forum of WISTA-UK, part of the Women’s International Shipping & Trading Forum.

Geography teacher Carol Parfitt encouraged her pupils – Annaleise Donovan-Lowe, Sam Lodge, James Brace, Daanyaal Khan, Ella Vennik and Rob Chandler – to look into why and how the UK is so dependent on shipping and seafarers.

The Mountbatten team wanted to see for themselves what goes on at the quaysides and ships, and secured permission from Associated British Ports at Southampton to interview officials. They met port manager Clive Thomas; deputy harbour master Ray Blair; Ray Facey, commercial manager at Solent Stevedores; Hanif Brora, head of port operations and safety; and Adam Sharp from Royal Caribbean Cruises. 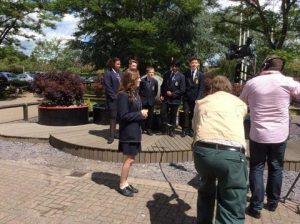 Filming outside the school. Photo by Lara Simpson.

Mr Thomas, who describes seafarers as the unseen heroes of the marine trade, said: “The UK relies on its ports and seafarers to provide so much of what we take for granted on a daily basis. The students should be very proud of the finished film. They are excellent ambassadors for their school.”

Mr Blair said there were 9, 000 to 10, 000 ships entering the port each year, but that was not the full picture: there were 70, 000 to 80, 000 vessel movements within the port, plus hundreds or thousands by leisure craft. The school group learned that 70% of port activity was trade with the Far East, and observed the huge cruise ships entering the harbour.

The pupils met cadets from Warsash Maritime Academy, who described their training for a career at sea.  For some of the youngsters, this was the most impressive moment: learning of the hard work and dedication put in by such cadets.

Looking back on the learning experience, one girl exclaims: “I think seafarers are really under-appreciated. Now I know how much work they put in.” The film ends with a chorus from the students: “Now we know what the sea does for us.” 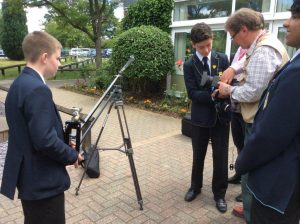 Commissioned by Seafarers UK,  a charity that provides funding for seafarers in need and their families, the film was funded by the Maritime Educational Foundation. The foundation has a board of trustees who represent Nautilus International; the Rail, Maritime and Transport Workers union; several UK-based shipping companies; and the UK Chamber of Shipping.

Seafarers UK, which relies on public donations and legacies, last year gave a total of £2.5m in grants to more than 80 maritime welfare charities.