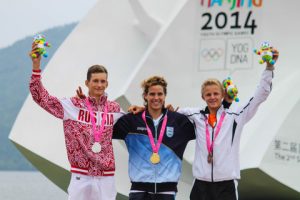 A single undiscardable race brought the Techno 293 racing to a close with the conditions testing the 20 boy’s and 21 girl’s racers who took to the course. Three knots gusting up to eight knots from an easterly direction made life tough on the race course with those with excellent tactical nous and light wind prowess excelling.

The points were extremely tight between the top seven of the pack with plenty of equations possible. In the end it turned out to be a tussle at the top between Saubidet Birkner and Tokarev.

Saubidet Birkner and Tokarev jostled for position throughout the final race with the places going to and fro. The Argentine read the conditions perfectly to overtake Tokarev and finish second in the final race, one place ahead of the Russian to take the title.

“I’m very happy because the wind was very difficult today, ” said the Argentina. “I raced very good, I was always on the right side and I finished second and first overall, so it’s perfect.

“We’ve trained all of the year for this event so we are very happy that that I finished first.”

From six races, Tokarev took a one point lead over the Argentine going into the final day. Saubidet Birkner was aware of the threat that Tokarev posed, as he explained, “He’s very good in this wind and in this wind I think he’s the best. I started very good and very near to him and I raced always next to him because I was second and one point behind him. In the last lap I was on the right side so I finished second and he finished third.”

Tokarev was visibly disappointed upon completion of the final race but was happy ashore, “I was behind my opponent at the second upwind but the wind dropped and my opponent went ahead of me so maybe he was more powerful or maybe it was luck.

“I’m happy that I have silver and the girl from my team also picked up silver so Russia is the most powerful team in the Techno now.”

The Netherlands Lars van Someren (NED) came into the day with a chance of gold and a threat of dropping completely out of the medals. He came through in fourth position to seal bronze and after racing he said, “I’m super happy. Before I came here I expected a top five but a medal is amazing. I love being on the podium.”

Van Someren headed straight to the spectator stand after racing where he greeted his family, “Well my dad has been over excited all the week. He’s supported me all the way and my mother as well with all the time they’ve invested with the training, the driving, buying equipment and without them I couldn’t have done it so that’s why I wanted to thank them first.”

Linli Wu took gold for China in the Girl’s Techno 293 with a final race bullet stylishly sealing the deal on her home waters.

Wu dominated the pack throughout the week and took a seven point advantage into the final day. Despite being middle of the pack at the first mark she worked her way up the fleet to seal an emphatic victory with the chasing racers a considerable distance behind.

After racing Wu said, “I had good starts and used the wind shifts and got to know the wind well before. I could see from the beginning it would be pumping tactics and I am quite good at that.

“I am very happy and very proud.”

Before racing commenced the Chinese sailor was somewhat of an unknown quantity but the fleet got to know her quickly as she took four of seven race victories.

Mariam Sekhposyan picked up silver and was content with her performance, “I’m happy that everything is over but I’m upset that it’s just silver because I didn’t know the Chinese girl and when I saw her in the first races I was like, ‘what, who is this?’ but she is very good.”

France’s Lucie Pianazza wrapped up bronze, finishing the final race in fourth, “It was difficult because the wind moved a lot but I finished third or fourth because I arrived as the same time as the Thailand sailor. It’s great because I am third and it’s beautiful.

“I would like to have an Olympic medal but I have bronze here and I am really happy. I will move to the RS:X and I would like to go to the Worlds and be in the top and one of the best athletes. I want to sail at the ISAF Youth Worlds.”