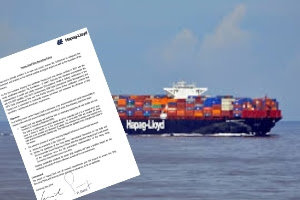 “While previously our second-hand ships were used for a longer time by their new owners after we had sold them, we recently had to realize that buyers had passed on the ships more and more rapidly for demolition, in particular to ship breakers who use the beaching method. As this method of shipbreaking does not fulfill Hapag-Lloyd’s strict criteria for workers’ safety and environmental protection, we ourselves will in the future monitor and supervise the professional recycling of ships in a certified facility following the requirements of the Hong Kong Convention”,  says a Hapag-Lloyd spokesperson.

The Platform welcomes this progressive policy change and strongly encourages other ship owners to follow Hapag-Lloyd’s example and only use modern ship recycling facilities. Already, Hapag-Lloyd has decided to sell the «New Orleans Express» to a ship recycling facility in China, where the shipping company will be monitoring the recycling process. The Platform has had a constructive dialogue with Hapag-Lloyd over several months and provided expertise on the issue.

“We hope that Hapag-Lloyd will be an inspiring example for more German ship owners and other leading companies in the maritime industry in Europe and beyond, ” says Patrizia Heidegger, Executive Director of the NGO Shipbreaking Platform. “Fortunately, more and more ship owners are realizing that they do not have to sell their old ships on a shady ‘second-hand market’, where they will end up in a polluting and dangerous beach breaking yard. As Hapag-Lloyd demonstrates, feasible and financially viable solutions that are clean, safe and fair exist.”

Last February, the Platform joined a demonstration in front of the German ship owners association offices in Hamburg, calling for an industry-wide “off the beach” standard for the recycling of obsolete ships [2]. A record high 80 percent of all German-owned end-of-life vessels were broken on South Asia beaches last year [3].

“It is shameful for the German ship owning community that so few of them care about clean and safe ship recycling, ” says Patrizia Heidegger. “It is completely unacceptable that leading companies allow to make profits by ignoring the severe pollution caused by shipbreaking and the accidents that maim or kill workers on the beaches of South Asia. We have been able to clearly link fatal accidents in the shipbreaking industry in South Asia to leading ship owners, amongst them German owner Johann M.K. Blumenthal. It is high time for the German ship owners to face their responsibility and put in place ship recycling policies that will ensure clean and safe practices. There are no excuses – neither the use of flags of convenience nor complex financing structures in shipping free ship owners from their responsibility to make sure their business does not cause harm.”

The European Commission will publish a list of audited ship recycling facilities next year. Facilities worldwide will only be listed by the European Commission if they comply with European standards of environmental protection and worker’s health and safety, and are in line with the requirements of the Hong Kong Convention, an international regulation on ship recycling not yet in force. Ship owners anywhere in the world will be able to use this list to make a responsible choice for the disposal of their end-of-life ships.

“The European Commission’s list will put an end to a confusing situation where everybody can claim to provide ‘green’ ship recycling. Actually, the Commission is providing ship owners with a service – their selection of compliant facilities will make it easier for ship owners to opt for clean and safe facilities where the risk of pollution and accidents is reduced, ” says Heidegger. “Real investments in order to set up modern ship recycling facilities off the beach in developing countries such as India or Bangladesh will only become economically interesting when more ship owners follow the example of Hapag-Lloyd and set aside part of their profit in return for clean and safe recycling that does not exploit the environment and workers of developing countries.”

See the press coverage about Hapag-Lloyd’s decision on our website.

Below is a short selection:

[2] See the press release about our demonstration