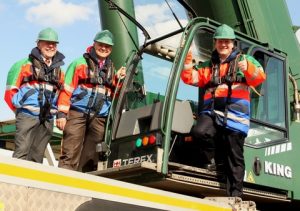 It was out with the old to prepare to bring in the new when Dover MP Charlie Elphicke stood alongside Dover Harbour Board Chairman, George Jenkins OBE, and Chief Executive, Tim Waggott, on Friday 22 August. All three were there to start the demolition of the old Seacat berth at the former hoverport – the first physical step in the major revival plan for the Port.

The Dover Western Docks Revival project is a multi-million pound port regeneration project. The demolition of the old Seacat berth, to be completed by the end of 2014, is the first stage in a project that will be a catalyst for the regeneration of Dover, the old berth making way for a new cargo terminal and associated waterfront developments over the next few years.

Charlie Elphicke: “It is a real pleasure to be here at the groundbreaking of the Western Docks Revival. It’s great to see the commitment of the port to new investment and the creation of hundreds of new local jobs. There’s a real sense of change and partnership with the town. New investment, new community directors and a new fund for Dover too. A partnership that can strengthen Port of Dover’s position as one of the UK’s leading ports and enhance its position as the leading ferry port in Europe.”

Tim Waggott: “This demonstrates ongoing momentum for Dover Western Docks Revival that will bring the town and the port closer together as we develop a port that will protect our long-term port capacity and bring new business to Dover. We have spent a great deal of time discussing and debating the plan and this begins our journey to fulfilling those promises. This is a significant milestone as we continue regenerating the port.”

· The Port of Dover is Europe’s busiest international ferry port, the UK’s second busiest cruise port, operates successful cargo and marina businesses and has a diverse property portfolio
· £89 billion of trade handled per annum
· £320 million GVA to the UK economy per annum
· 2.2 million freight vehicles per annum (98% of freight traffic by weight either originating in or destined for the EU)
· 13 million passengers per annum
· Over 140 cruise liner calls per annum
· Cargo tonnage maintained at record levels
· A major opportunity acting as a catalyst for regeneration of Dover with the potential to create over 600 new jobs, safeguard 140 jobs, develop a new cargo terminal and port centric distribution facility, protect long term port capacity and transform the Waterfront