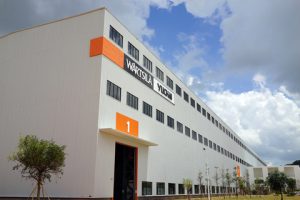 A view of Wärtsilä and Yuchai joint venture factory

Wärtsilä Corporation, 2 September 2014 at 10 am EET – Wärtsilä Yuchai Engine Co., Ltd, a joint venture between Wärtsilä and Yuchai Marine Power Co., Ltd., has inaugurated its new factory in Doumen District, Zhuhai City, Guangdong Province, China. The new factory covers a total area of 266, 700 square meters and will be used for the assembly and testing of Wärtsilä 20, Wärtsilä 26 and Wärtsilä 32 medium speed engines. The assembly lines and test beds are in partial operation already, and the plant is expected to be in full production before the end of 2016. Wärtsilä and Yuchai Marine Power Co. Ltd. (YCMP), a subsidiary of Guangxi Yuchai Group, established the 50/50 joint venture in May 2013. The joint venture, for which the value of Wärtsilä’s investment was approximately EUR 17 million, will strengthen Wärtsilä’s competitiveness in the Asian markets and increase its focus on the offshore and special segments in China, the world’s largest shipbuilding country.

“As China is the world’s major supplier of newbuild ships,  the Chinese market plays a central role in Wärtsilä’s global growth strategy. By inaugurating another Wärtsilä joint venture in China, we not only demonstrate our strong commitment to this important market, but also take another significant step towards enhancing our presence in the region. Strengthening our local production capacity is an important part of this strategy. Through this partnership with Yuchai, China’s leading high-speed engine manufacturer and market leader, we are convinced we can serve our customers in China in the best possible way and further reinforce our market leadership position for medium-speed engines, ” says Björn Rosengren, President and CEO of Wärtsilä Corporation.

“We are proud to witness the inauguration of Wärtsilä Yuchai Engine Company. Wärtsilä is a global technology leader in the marine industry with a broad range of high quality offerings with economical and environmental advantages for ship owners and operators. In line with the vision of Yuchai Group, this joint venture is a key milestone in our significant long-term cooperationwith Wärtsilä in serving the local marine industry. This is also a great example of two leading companies working together to create jobs, growth and prosperity, “says Gu Tangsheng,  President of Yuchai Group.

Another view of the Wärtsilä and Yuchai joint venture factory

The Wärtsilä 20, Wärtsilä 26 and Wärtsilä 32 engines that Wärtsilä Yuchai Engine Company produces are all well established on the market, and are known for their reliability, fuel efficiency and low levels of exhaust emissions. They are also fully optimized for today’s flexible manufacturing methods. All three engines are fully compliant with the IMO Tier II exhaust emission regulations as set out in Annex VI of the MARPOL 73/78 convention.

Wärtsilä has been present in China for more than 20 years, through its fully owned subsidiary and long-term licensing agreements. To serve the world’s largest shipbuilding region, Wärtsilä has established joint ventures for propeller, auxiliary engines and mid-size medium-speed engine production with strong Chinese industrial groups and a joint venture for automation services. Wärtsilä also manufactures thrusters at its fully owned company facilities, while low-speed engines are produced by eight licensees and by a joint venture company. The acquisitions of Cedervall in 2011 and Hamworthy in 2012 have further strengthened Wärtsilä’s leading position in global markets, notably in marine services and offshore, marine gas applications, as well as environmental solutions.

In the marine market, the leading Chinese ship owners and shipyards are Wärtsilä’s customers. Wärtsilä Services provides service and maintenance for its customers from eight locations in China, the largest of which is in Shanghai. In the energy markets, Wärtsilä has delivered power plants producing a total of 3500 MW of electricity to customers in China. Including Wärtsilä joint venture companies, there are currently more than 2000 Wärtsilä employees working in China.

Wärtsilä is a global leader in complete lifecycle power solutions for the marine and energy markets. By emphasising technological innovation and total efficiency, Wärtsilä maximises the environmental and economic performance of the vessels and power plants of its customers.
In 2013, Wärtsilä’s net sales totalled EUR 4.7 billion with approximately 18, 700 employees. The company has operations in more than 200 locations in nearly 70 countries around the world. Wärtsilä is listed on the NASDAQ OMX Helsinki, Finland.
www.wartsila.com