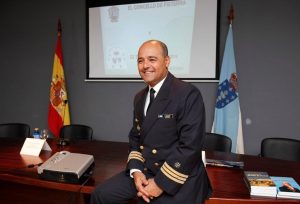 WISTA Argentina chooses marine educator and author Horacio Vázquez as 2014 Personality of the Year and nominee for WISTA International title,  By James Brewer

A champion of the advancement of women in the maritime industry has been selected by WISTA Argentina as the group’s Personality of the Year 2014. Horacio Guillermo Vázquez Rivarola, a professor and staff officer of the National Nautical School of Argentina, has won praise from many sectors of the Women’s International Shipping and Trading Association for publicising the role of women in the merchant marine and for his wider educational initiatives.

Prof Vázquez will be the nominee of WISTA Argentina for International Personality of the Year, when the WISTA  International 2014 Conference convenes from October 8-10 in Limassol.

Prof Vázquez has had published some 24 books in Argentina and Spain and is an Associate Fellow of the Nautical Institute. 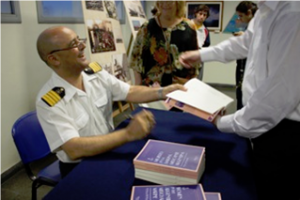 In 2010 he began research that led to the publication in November 2013 in Spanish and English of Women in the Argentine Merchant Marine, with a prologue by Koji Sekimizu, secretary-general of the International Maritime Organization.

Divided into two main parts, the book narrates inspiring stories, one of the earliest of which is about Isabel de Guevara, a member of the Spanish expedition of Don Pedro de Mendoza who was at the wheel of one of his ships sailing the River Plate. The book tells of Jeanne Baret  who disguised as a man accompanied her male botanist friend on the expedition of Louis Antoine de Bougainville, becoming the first woman to circumnavigate the planet. The first part ends with the incorporation of women in the National Nautical School of Argentina, after a fight against stubborn bureaucracy.

The second part contains testimony of pioneers including one of the first female naval commissioners, a veteran radio-telegrapy operator  and war veteran, the first female pilots, chief engineers and captains, and the wives of seafarers.

Prof Vázquez is working with collaborators in Spain and Peru towards his next books, on the participation of women in the merchant marines of those countries.

To raise awareness of the maritime industry and encourage children to recognise how it underpins everyday life, he launched the “Tritón” project, supported by organisations including WISTA Argentina and WISTA-UK. It features an illustrated bookTritón the Tug and his friends the Boats, an animated cartoon and a webpage. The English language version of the book was introduced at the WISTA-UK Liverpool Forum, in June 2014.

A qualified marine radio electronics officer, Prof Vázquez is among other responsibilities head director of the Argentine Maritime Museum Ing Cerviño. He has been a visiting lecturer at shipping institutions, universities and academies in Spain, the UK, Peru and the US. He was involved between 1994 and 2011 in training 2, 500 officers, including 100 female deck officers and chief engineers.

WISTA Argentina said that Prof Vázquez “inspires, educates, illustrates, amuses and integrates” as he diffuses his enthusiasm for the maritime industry.

Prof Vázquez was chosen as Personality of the Year by a panel comprising Ángel Elías, chairman of the ENAPRO authority of the Port of Rosario; Coast Guard retired officer Carlos Manuel Trueba, a lawyer; and Antonio Zuidwijk, a consultant and expert on multimodal transport who has long been a senior figure in the Argentine and international ports industry.

The new World Rowing Champions for 2014 are crowned