Kiwis Out To Defend Skiff Crowns At Santander 2014 ISAF Worlds 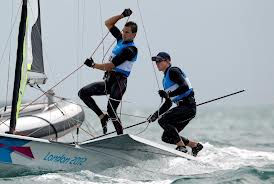 New Zealand’s 49er and 49erFX teams will head to the Santander 2014 ISAF Sailing World Championships aiming to defend their title and continue their run of podium finishes.

Peter Burling and Blair Tuke (NZL) are on an unbeaten run of six consecutive 49er regatta victories, stemming from June 2013 whilst Alex Maloney and Molly Meech (NZL) have finished on the podium at ten of 11 49erFX events they’ve competed at. Both crews struck gold at the 2013 worlds in Marseille, France and will be looking to hold onto their title at Santander 2014.

The 49er fleet at Santander 2014 will see 88 teams compete from 33 nations whilst the 49erFX pack features 62 teams from 29 nations. As well as world championship titles on the line, ten Rio 2016 Olympic Sailing Competition places in both fleets will be won based on results in Santander.

After taking silver at London 2012 Burling and Tuke have been the pair to beat in the 49er. In world class fields the Kiwis have dominated and will be aiming to continue that run in Santander, “It’s the big one of the year for us so all of our focus has been on that, ” said Tuke. “We don’t go to events to come second or further back so we’re going to give it our best shot.”

The Kiwis have had an exceptional 2014, winning ISAF Sailing World Cup Mallorca and Hyeres, the 49er Open Europeans and the Aquece Rio International Sailing Regatta 2014. Confidence is high within the camp and Burling also has his eyes on the prize, “We’re quite enjoying having that New Zealand 1 on the sail at the moment and the goal is definitely to go and try and defend that title. As a bonus to qualify the country for the games, that’s obviously the second goal but hopefully between us and our training partners being first and second at the last worlds we’ll be able to get that done.”

Nathan Outteridge and Iain Jensen (AUS) were the last team to beat the Kiwis and it came on the grandest of stages, the London 2012 Olympic Games. Post-Olympics the Australians focused on other projects but with a good season behind them they’re aiming to put a stop to the Kiwis dominance, “They’ve been on a bit of streak since the Olympics by winning all of the events, ” said Outteridge. “We really haven’t been putting a lot of time into our 49er sailing but this year Santander will be our third or fourth major event. We did Hyeres, Europeans and Rio so we should have our racing skills back and we’re looking forward to taking them on.”

As a pair Outteridge and Jensen have gold medals from the 2009, 2011 and 2012 world championships, with Outteridge also a 2008 victor with Ben Austin. Having finished fifth at the 2013 worlds the Australians head to Santander well prepared with a solid plan, “With those events a lot of it is about qualifying well so when you get the final series at the end of the week you’re in a good position so we’re hoping we can get through qualifying unscathed and have some really good racing in the finals.

“Everything this year has been building up to the worlds to ensure we qualify our spot for Australia. It’s been a while since we’ve had an ISAF Worlds so it will be nice to try and win another one, ” concluded Outteridge.

New Zealand’s Maloney and Meech claimed the inaugural 49erFX world title in 2013 and will be aiming to defend their title in Santander. A fleet of 62-boats will take to the water in Santander and Meech is focused on the task ahead, “Coming off from a win at the world’s last year we’re hoping to try and win. We’ll do our best there but I’ve heard it’s a tricky venue as well so we’ll see how it goes. We would love to qualify New Zealand and obviously that is the aim of the event but our personal aim is to medal.”

Maloney and Meech have been at the front of the pack in all but one event they’ve competed at since they won the 2012 ISAF Sailing World Cup Melbourne. Only an 11th at the 2014 ISAF Sailing World Cup Mallorca tarnishes their record but with the fleet gaining experience Meech knows the task of defending their world title won’t be an easy one, “This year both Ida [Marie Nielsen] and Marie [Thusgaard Olsen (DEN)] and Martine [Grael] and Kahena [Kunze (BRA)] have really kept up their performances at the top. I think that quite a few of the other teams have become quite competitive as well. There will probably be a mixture of the British, the Danish, the Dutch and a few German teams and hopefully you’ll see the Kiwis up there as well.”

Brazil’s Grael and Kunze have been the form team of 2014 with ISAF Sailing World Cup Mallorca and Hyeres, Garda and Trentino Olympic Week and Aquece Rio International Sailing Regatta 2014 gold to their name. The Brazilians have found an edge over their rivals and with the Brazilian Rio 2016 49erFX spot guaranteed they can focus solely on victory, “The Worlds are our biggest goal of the year, ” said Grael. “We don’t have the pressure to do so well like the other teams but we will do what we always do, do our best and have fun there. Every championship is a pleasure to sail, race, win and be with the other girls.

“I think the New Zealand girls are doing pretty well but there are so many doing well but it depends on the conditions. I think the Danish girls are good so we’ll see what it’ll be like there.”

Denmark’s Nielsen and Olsen defeated the Kiwis and the Brazilians at the 2014 European Championship in Helsinki, Finland and will head to Santander full of confidence.

Several other 49erFX teams continue to find their feet in the boat and will be looking to peak in Santander. Strong competition for podium places will also come from World #3 Sarah Steyaert and Julie Bossard (FRA), World #5 Annemiek Bekkering and Annette Duetz (NED), World #6 Tamara Echegoyen and Berta Betanzos (ESP) and the Australian, British, German and Swedish squads.

The 49er and 49erFX fleets will kick start their competition on 15 September with the start of the qualification series. That will conclude on 16 September with five races for both fleets scheduled over the opening two days.

The final series will commence on 17 September with 18 September the scheduled reserve day. Two further days of final series on 18 and 19 September will conclude fleet racing with the podium places to be decided in the Medal Races on 21 September.