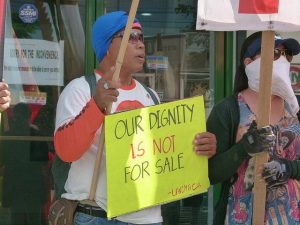 5 September 2014 – Philippines tuna workers dismissed for forming a union have staged a week of action with the support of an international delegation from the ITF/IUF (International Union of Food, Agricultural and Hospitality Workers) fisheries programme.

Members of the Catcher to counter team have been in General Santos to put their weight behind the ongoing campaign for reinstatement and voluntary union recognition for members of the United Workers of Citra Mina Group of Companies Union (UWCMGCU). The visit coincides with the city’s annual tuna festival, which celebrates the huge contribution of the tuna industry to the Philippines’ economy.

Actions throughout the week have included protests and solidarity events attended by hundreds of community and church supporters. General Santos local pastor Father Edwin said it was a duty of parishioners to look after fishers and their families. Hear more

Workers wearing Justice for Citra Mina t-shirts staged a lie down protest in the same venue as the tuna congress (part of the festival) with president of the UWCMGCU Jumary Arevalo calling it “ironic” that the theme of the congress was ‘shared resources, shared responsibility’ when the Citra Mina Group of Companies is failing to act responsibly towards workers. See the workers in action here

Union negotiators and members of the international delegation were left disappointed earlier this week when a session with the local branch of the national conciliation and mediation board broke down, leading them to issue a letter to the Philippines Department of Labour and Employment expressing a lack of confidence in the system.

Consideration is now being given to the lodging of an International Labour Organization complaint against Citra Mina if the dispute isn’t resolved in the near future.

Catcher to counter programme leader Liz Blackshaw said: “Our aim this week and the aim of the programme overall is to improve working conditions and labour rights for fishers. With disputes like Citra Mina ongoing it makes that task really difficult.

“It’s a situation which could be easily resolved by the employer if there was a will, but that just hasn’t been our experience at all. We want this dispute over so that workers can go back to their jobs and we can get on with helping to make sure the Philippines fishing industry overcomes it’s EU yellow card on illegal, unregulated and unreported fishing so the opportunity to achieve a beneficial trade agreement with Europe doesn’t disappear. That would be a disaster for business, the economy and workers.”