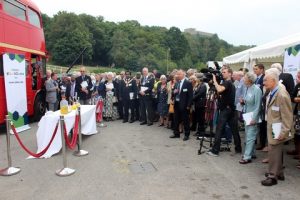 ·      Demo of SulNOx fuel emulsions watched by international audience of politicans and business people, including one-third of all London Mayors

Thursday’s public demonstration of SulNOxEco Fuels on a 1959 Routemaster bus resulted in particulate matter being reduced by 91 percent and Nitrogen Oxide gases by 60 percent, when compared with the use of normal diesel on the same engine.

Stephen Bamford, Director of SulNOx Fuel Fusions, said the trial was an “historic moment in the world’s fight against pollution”.

Fuel emulsions are not new technology. Bamford explained: “The benefits of adding water to diesel fuel has been known about since the early 1900s, but the problem has been “stratification” of the emulsion and the excessive cost to the consumer.

“The problem is water and fuel don’t mix. Over a relatively short period of time these two components separate and as every engineer knows, putting pure water into a combustion engine has catastrophic results.”

The company told an audience at the London Bus Museum on Thursday that they have overcome this by developing a new mixing process that smashes the fuel together, repeatedly at great speed and under high pressure to alter the mixture at a nano, or quantum level.

An additive is then injected into the mix which helps to further stabilise the emulsion, that can then be burnt just like regular fuel in any engine that burns hydrocarbon based fuel.

The test yesterday in Weybridge involved the bus’s engine initially running on regular diesel, while a series of measurements were taken, PM, NOx and engine temperature. The fuel supply was then switched to white diesel, which was mixed under laboratory conditions at the SulNOx testing centre and the tests repeated.

To validate these test results the company has commissioned Ricardo, a global engineering, environmental and strategic consultancy, and is in talks with Cambridge University, to carry out an extensive independent testing programme into the new emulsions and their potential benefits.

The research programme and series of tests follows the publications of a new report from the Department of Health that claimed that 29, 000 people a year die as a result pollution in the UK, with one in four, over 7, 000 deaths linked to emissions from diesel engines alone. This has prompted the Mayor of London, Boris Johnson and some London local authorities to explore a range of punitive measures aimed at forcing drivers to turn off their car engines.

Mr Bamford continued: “The challenge facing every country and company is how to reduce their emissions of toxic gasses and particulate matter, while still remaining competitive, you simply can ban the combustion engine tomorrow.

“Governments of all colours have played a role in encouraging people to switch to more efficient cars and use public transport, but have been weary of fuel emulsions because of the historic problems. Now science and in particular the application of nanotechnology has provided us with an answer.

“By altering the size of the fuel particles being burnt at a nano-level we can dramatically improve the efficiency of the combustion engine by using a stable emulsion and without the need for costly modifications.

“This solution has the dual benefit of cutting pollution without damaging the economy. The only question really is why has this not been done sooner?”

The company will be targeting the marine sector, which has been dubbed the world’s worst polluters by environmentalists, because the biggest 16 ships, produce as much pollution as all the cars in the world put together.

Experts say that the world’s super ships produce this eye-watering amount of pollution, because of their size and the type of fuel they burn. Bunker fuel used by ships contains about four per cent sulphur, 4, 500 times more than is allowed in car fuel in the EU.

This means these ships can emit as much as 5, 000 tons of sulphur a year the equivalent of 50 million cars. Emulsified fuel could potentially cut this, but will require further testing and development before these results can be confirmed.

Mr Bamford concluded: “We are trying to target the most environmentally damaging industries like shipping first, but ultimately we want every drive to switch to emulsified fuel.”

SulNOx Fuel Fusions PLC produces and supplies the world’s leading fuel emulsion. SulNOxEco Fuel is the cheapest, safest and highest quality fuel emulsion on the market, with the potential to significantly reduce many of the negative environmental impacts of burning hydrocarbons.