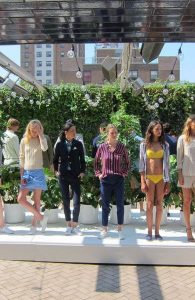 Trying to squeeze in my busy professional schedule a rich social life is not always an easy task, and Day 2 of the shows in NYC was a great example of this struggle, including multiple fashion week events and a pre-wedding party of a good stylish friend in the evening. Nevertheless, I made my choices, skipped couple of shows, and managed to honor the couple celebrating their immensely important love.

This day started early (9 AM) with the Stella Nolasco show offering us the chance to see amazing, super romantic eveningwear. There was a huge waiting line at Lincoln Center and this was partly because most guests had invites without the necessary barcodes, and partly because of the Project Runway show taking place at the tents an hour later. The reward for that was a great collection of interesting silhouettes in lace colored yellow, coral, white and other shades; with embroidery and embellishments being the counterpart to floral prints producing a similar effect. Cutouts further contributed to the magical interplay of volumes in most of the creations.

My next endeavor was getting to the Highline Hotel (180 10th Avenue) on time for the presentation of the collection À Moi by Alexandra Alonso. But my mind passed this destination for another classical NYFW one: the Highline Room at the Standard Hotel. What a mistake! I had to rush and get the next cab towards the right direction and finally managed to be there. The promising Spanish designer – now based and producing in NYC – got inspired by her ancestral past to produce a wearable collection with artisanal edge called Reflections, that was travelling back in the 20’s to the French countryside and places with rich European traditions. It was the reproduction of a retro album of family getaways in Biarritz in a way that can reflect a timeless attitude of luxurious sportiveness. The collection included beautiful creations made of crisp organza (very SS 15), and soft Italian cotton, in cool white, navy, and iridescent tones contrasted with neutral undertones. It had many elements from retro tennis players and sailors. It matched the oldie spirit of this spacious room at the Highline Hotel, which I’ve already visited couple of times for the FW14 shows back in February. Oldie but also new, one might say!

Back to Lincoln Center at noon, the Zimmermann collection called ‘Tell me seer’ featured lots of asymmetric romantic lace and shiny fabrics (a huge trend for next season), with a lunar/celestial inspiration. It was all about luxury swimwear and summertime outfits mixing astronomy with astrology, tarot and other sorts of fortune-telling, as a theme. The clothes were enriched with details such as pentacle lace, seer waxed, and gold accents, while the prevalent colors were black, pearl white, glacier or ice blue, silver cream, aquamarine and burgundy. It was the story of a dreamy gypsy girl living in our days and favoring a deconstructed version of feminine elegance.

Dazzled by this seductive swimwear collection and almost ‘burned’ by the sunshine, I took my brightest mood to the next location; the North Cabana at the Maritime Hotel (88 9th Avenue) whereGant Rugger presented a classic American preppy collection for men and women. At this hidden terrace and in high temperatures models – dubbed also heroic creatures – were sporting some amazingly styled combos of tops and bottoms as well as blazers and other kinds of lighter outerwear, while guests enjoyed frozen drinks mostly at the air-conditioned indoor space. The organizers have been taking care of the models too, placing some fans around and hydrating them regularly. The sailor chic style dominating this collection was equally hot and to be instantly adopted. Quite early the coolest fashion industry people – especially those interested in menswear – arrived at the event, to be wowed by some jacket-shorts combos, the smart use of stripes and of beautiful neutrals. It was a seriously fashionable crowd!

I also had time for a proper lunch break at that day – not the other ones I was juggling throughout the week – so I went to Lilly’s in Soho for a yummy and unique avocado toast, their Qinoa salad and Melvin’s signature Immunity Booster juice. This Jamaican celeb hotspot, with laidback atmosphere and great service, gave me the power shot I needed to continue with my fashion-savvy adventures. It was a super healthy, delicious meal!

Later on at the Hudson Hotel in a penthouse, I went rapidly through the Haze collection, a line of cool sunglasses with interesting shapes and unexpected metallic details, presented on a huge suspended triangle and surrounded by half-naked models in a pristine white background. It was party atmosphere elevated through high-tech elements such as a digital touch-screen display of all necessary info about the collection.

Couldn’t get more of it, since I had to hit my hotel room, change to eveningwear in seconds and later stun the world with a fully sequined gown I specially designed for the pre-wedding party of my friend at the Royal Palms Shuffleboard Club in Brooklyn. According to the dress code, most ladies were wearing sequins while men opted for Hawaiian shirts with some really impressive results. It was a sparkly and colorful night with game and cocktails intertwined in a perfect experience topped with the bride’s smile of pure happiness!

Rubens and his Legacy