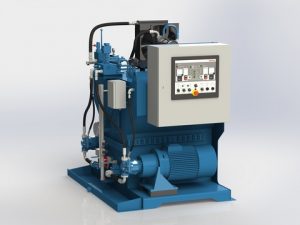 “A ship has a closed electrical system and so current peaks may cause disturbances elsewhere in the system. Therefore when high-powered motors are introduced into hydraulic systems, it is important that the starting process is carefully controlled, ” says Mika Åback, MacGregor Technical Manager, Control Systems. “For a heavy-duty electric motor the starting current peak can be up to ten times its operating current at its nominal running output power, and so it is important to reduce this demand peak on the ship’s electrical supply.” 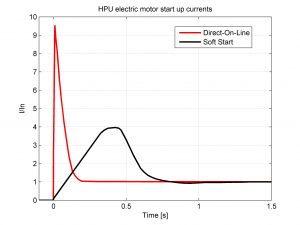 For convenient operation, MacGregor offers an optional small remote control unit which allows the operator to start up and shut down the hydraulic pump unit (HPU) remotely. This can save a lot of time when the HPU is situated well away from the control stands.

Safety is paramount and there should always be at least two people involved in hatch cover operations. “As standard we provide an emergency stop button on the opposite side of the hatchway to the control stand, ” he notes. “This will shut down the HPU when activated. As an option we offer a confirmation button, again located on the opposite side of the hatch to the control position. This replaces the standard emergency stop button, and it must be pressed and held down throughout the whole operation, ensuring that two people are always involved in hatch cover movements.

“An additional advantage is that the hydraulic system is pressurised only when the button is held down, ” says Mr Åback. “This reduces the number of start/stop sequences, which slows down the oil’s chemical aging process and prolongs the components’ working life. It is also energy efficient, because the motors only work at full capacity during hatch operation.”

The new starter unit is intended both for newbuild applications and for retrofit to existing hatch cover operating systems. It also has a data logging facility, accessible to MacGregor engineers for service and diagnostic purposes.

MacGregor serves the offshore, maritime transportation and naval logistics markets in ports and terminals as well as on board ships and rigs. MacGregor solutions combine load and cargo access, stowage, care and handling functions to optimise lifetime profitability, productivity and environmental sustainability. www.macgregor.com