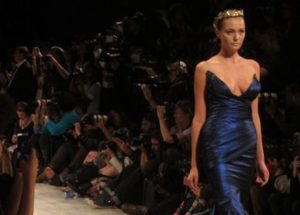 There was great variety of styles and attitudes at that day; the same spirit that transcended the whole NY Fashion Week. The experience ranged from artsy and grungy, to folk, luxury and exclusive, naturalist and glam. Changing moods throughout the daily shows is one of the main traits of this action-packed week. But above all, we see great talent, passion, and ambition; creative people that want to succeed and charm their super-demanding audience.

The first show of the day was Vivienne Hu’s at Chelsea Pier 59 Studios (West Side Highway and 18th Street) at 9.30 AM. Thank God, there was a taxi almost waiting for me outside the Empire Hotel! This elegant and low-profile upcoming NY-based designer – former investment banker – debuting in SS12 and now part of the official MB Fashion Week schedule, showcased a beautiful blend of NY vibes, Asian and European influences, in subtle neutral colors, spiced up with brighter shades, artsy ombré effect, geo motifs, textural details, cut-outs and asymmetries. Once again (previous day at Helen Yarmak’s presentation), Miss USA, Teen USA, and Universe were in presence, watching the show. I even had some time to go backstage and see the mood board and the lineup of the looks in more detail. Great job!

Going from this off-beat, zen environment to the street style hysteria and stardom frenzy, was the main course of the day at the celeb-packed Diesel Black Gold show with Rita Ora getting most of the attention, and paparazzi screams. I managed to get two of the most successful (up close) snaps of her, while she was getting in the car, after the show. She’s really hot! The collection designed by Andreas Melbostad was a clear reference to Texas biker culture and the clubbing scene in the noughties, with powerful bad girls adopting bralettes and micro vests, cute studded dresses and others with star-shaped motifs, not only in signature black, white, and metallics but also in stunning red, accessorized with sling-back kitten heels and the debuting Samsung Gear S; a wearable wrist piece with a 2-inch screen. It was way more feminine than before, with high-tech features and elements of playfulness. This high-gear catwalk with flashing bulbs as a backdrop, attracted the coolest crowd in the City including Anna Dello Russo, Giovanna Battaglia, Chiara Ferragni, Susie Lau, Susie Menkes, Natalie Joos, and Caroline Issa which I later snapped myself along with Bill Cunningham (which means this was the right place to be), and a whole army of camera-equipped professionals and non-professionals.

To a quieter setting, yet equally rebellious and even more, back at Lincoln Center,  Skingraft – a line that I’m stalking since last season – presented an amazing collection inspired by Santeria and Mexican prayer altars, but not looking folk at all. The LA-based designer Jonny Cota in collaboration with NY blood artist Jordan Eagles created a more spiritual and philosophical version of the urban wardrobe splattered with stylized elements of blood, smoke, earth, and bone, as well as other signature prints on sheer silk, nylons, and mesh. It was a very interesting collection not only for the hipsters who want to stand out but also for people who appreciate a unique motif or just great tailoring and fabrics. This time we had a brighter, but also mystical side of the brand that placed it more towards the high-end spectrum of fashion.

And fun went on at my next stop; the Maserati-Ermenegildo Zegna One of 100 party (360 W 33rdStreet); a presentation of 100 limited edition cars deriving from this ambitious collaboration and taking place in a few selected cities across the world. It was time to hang around and relax, enjoy the yummy food platters, drinks – mostly champagne – and amazing Venchi chocolates orderly and seductively placed in an impressive kiosk inside one of the three areas of the venue. There was red carpet at the entrance, huge chandeliers suspended from industrial-looking cranes, and lots of red in general. In the most prominent place sat the ultimate car; one that must be in many people’s dreams since that night! In another room you could see equally coveted accessories from the Zegna collection placed on stands atop a soft white carpet. The whole event meant luxury!

Back at Lincoln Center,  Michael Costello – known from his incredible emotional reaction during the Project Runway – presented us with an amazing eveningwear collection inspired by elements of nature such as forests, fields, caves, lakes, fire and the sea. Floor-length gowns with all kinds of embellishments and textural elaborations magically transformed his models into mystical creatures; better divine nymphs. It was all about the mythology of the red carpet at that day, on and off-catwalk!

But the most extraordinary thing happening to me was the fastest sushi dinner I’ve ever had in my life at a restaurant in Upper East Side. I arrived at 10 PM and I had to gobble all my food in less than 30 minutes because the kitchen and the whole restaurant were, strictly, closing by that time! It was yummy but for my health’s sake, I had to skip the lobster roll which came moments before my time was up! To recover we headed with friends to Harlem (first time there) for a cool drink! Way better than expected!