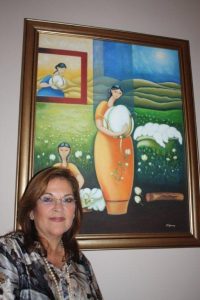 Marcela Muñoz Chávez with her painting of women of northwest Peru.

Diplomatic circles in London enjoy  an introduction to the artwork of Peru’s Marcela Muñoz Chávez,  By James Brewer

Marcela Muñoz Chávez, a Latin American artist of considerable distinction who diplomatically signs her canvases MChávez, is working in London these days on her output. She  is indeed a diplomatic person, for she has relocated to the capital with her husband,   Julio Muñoz-Deacon, ambassador of Peru to the UK and Ireland, and accompanies him on many of his official duties. The couple are two years into a five-year posting to capital, following the ambassador’s string of earlier senior appointments in the service of the Peruvian government.

Her zeal for manifesting her creativity on canvas has led to recognition in her home country, where she has several times exhibited, and to discovery by members of London’s diplomatic community and other guests who call at the couple’s official residence, in Bayswater.

A representative selection of her work adorns the walls of the mansion, the most famous resident of which was Victoria Eugenia (1887-1969), wife of Alfonso XIII of Spain and a grand-daughter of Queen Victoria of Britain. The couple separated while in exile and Victoria Eugenia lived for a short time in the UK before on the outbreak of World War II being asked to depart, leaving behind some of her elegant furniture. 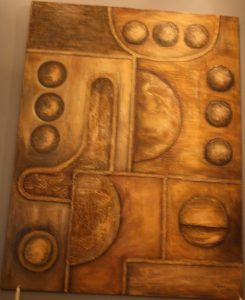 Ms Muñoz Chávez  travels artistically along two principal avenues: one of figurative expression of Peruvian themes, and another of energetic abstract formulations applied in a variety of medium.

In the first category are intimately observed  scenes in which people are intently absorbed in traditional tasks. One of the finest examples is a painting of cholas, women of mixed heritage. The work points to various elements of the northern part of Peru, where the artist grew up. These cholas are typically large women with very short necks, descendants of people of Indian and of Spanish origin, who live in the coastal regions. In the context of Peru, they are readily identifiable because people from the country’s sharply differing environmental regions are so physically different.

Her painting shows the women picking and gathering cotton, amid a landscape of small valleys and desert. There is reference to the painted and polished clay ceramics of Chulucanas, a town in the Andean foothills of the Piura Region. Often black and white, such pottery has its origin in pre-Inca times and is now exported widely, as one of the pre-eminent crafts of Peru.  It is seen as such a treasured heritage that it has been designated a Producto Bandera del Peru (national flag product). 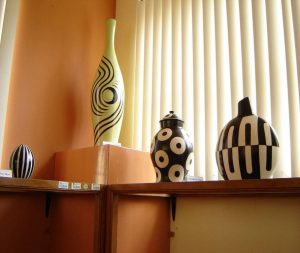 Marcela Muñoz Chávez  sets the scene for this painting – which has the quality of a devotional piece – in the northern coastal area of Piura, which contains the large the Sechura desert, with some settlements in the mountains. Francisco Pizarro founded the city of San Miguel de Piura, the first in Peru, in 1532.

By contrast, her abstract compositions are unrelated to her beloved homeland, and are the products of her impulse and imagination.

One in particular of her ‘texture abstracts, ’ painted while the couple were posted to Berlin, reminds her though of earth and mountains. She considers the untitled work, almost certainly justifiably, as “the best abstract I have done.” She went for earth colours and lots of yellow, and when she looks at the study now, it reminds her of the largely desert area in which she grew up, in the port city of Talara, noted for its oil refinery. Talara is the westernmost city of mainland South America, and 1, 000 km north of Lima.

That being said, in her abstract visions the artist did not set out to evoke her native land. As you fashion the artwork, “you follow your instincts at that moment, ” Ms Muñoz Chávez  says.  In that spirit, London is certain over the remainder of her term there to witness more of her original, inspiring creations.