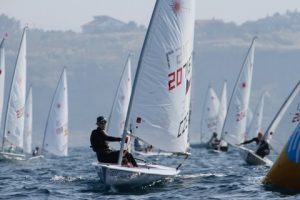 Friday 12 September 2014 – The thick fog that covered the harbour in Santander at the start of the day soon burnt off and gave way to a light 5 to 7 knot breeze from the north east allowing the Laser and Laser Radial Fleets to get afloat and start the Santander 2014 ISAF Sailing World Championships.

After a delay ashore there was a further postponement afloat waiting for the wind to fill before the start of the four race qualification series.

The 120 boat Women’s Laser Radial Fleet is split into two groups of 60, each scoring points from 1 to 60. In this size fleet a good start is critical especially as the right hand side of the course was favoured and in the lighter conditions boat speeds are similar. Those sailors that were able to put together two single figure results were guaranteed a place in the top ten whilst others were having death and glory results not necessarily in that order.

Veronika Fenclova (CZE) had a big smile on her face as she explained, “In the first race I had a good start and led at the first mark but I could not hold my position downwind and dropped to third even though we did change places several times before the finish.” In the second race she led from start to finish, “I had a good lead which protected me on the downwind.” Fenclova’s results were better than she expected as she has had a year off from sailing although she has been training hard for a month at Santander prior to the championship. 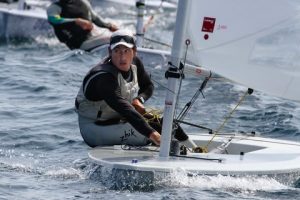 Min Gu from China is already looking like a worthy successor to the retired Olympic Champion Lijia Xu as she shares the same points with Fenclova at the top of the pack.

In the record 76 nation Men’s Laser fleet, sailing on a nearby course to the women, the story was much the same with Juan Maegli from Guatamala scoring exactly the same as Fenclova. He said “I had two good starts and went right both times. I had good speed and concentrated on trying to be consistent.”

He has created a four point gap over second place Tom Burton (AUS) who scored a fifth and third.

Defending champion Robert Scheidt BRA saw his fellow countryman Bruno Fontes finish four places ahead of him but he has been around enough to know that there is still a long way to go in this event, “I did not get far enough right for the shift. I struggled to catch up and could only get back to 13th. I was happy to finish second in the next race.” 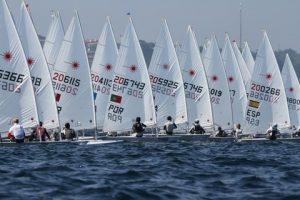 Two more races are scheduled for tomorrow to conclude the qualification series before the fleet is split into a gold, silver and bronze. A final six race series will be followed by a Medal Race.

“Functus officio” and section 67 of the Arbitration Act 1996