Saturday 13 September 2014 – Live Blog – A live blog will follow the ISAF Worlds from Thursday 11 September through to Sunday 21 September. The live blog is available here http://www.sailing.org/events/isafworlds/live-blog.phpIn the current weather system it was no surprise that once again there was no wind in the morning at the Santander 2014 ISAF Sailing World Championships but at least there was sun, initially.  Fleets were held ashore for a brief spell before an 8 knot breeze set in for the first races of the day.

There was then a long postponement on the courses that hosted the Laser, Laser Radial and Men’s and Women’s RS:X before the second race as a small front passed through the course area but in summary it was a day of thunderstorms (off the course areas), shifts and showers. 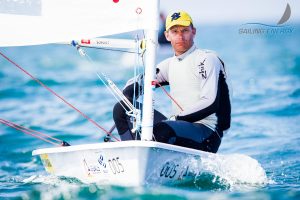 The men changed course areas to the area the women used the previous day which also gave them a stronger current to deal with. Defending World Champion Robert Scheidt (BRA), sailing in the last fleet to start, now heads the leader board after scoring the best results of the day, a first and third. Scheidt said,  “I had good starts, free of the line and then everything gets a lot easier. Because there was a lot of current throwing you on the line it was it was very difficult. Your instinct is to hold back so timing is critical. I think I managed to get that right.”

In the first starting fleet Nick Heiner (NED) nearly matched Scheidt’s score with first and a fourth,  “The last race was a bit short and skewed but overall I cannot complain, ” said Heiner as he moves into the second position. His fellow countryman Rutger van Schaardenbug sailing in the middle fleet was not happy with his mixed day,  “I got a first in the first race and then misjudged the current in the second race having a bad start and then I hit the first mark and could not clear myself.”

The top end of the fleet is starting to stabilise but there is still six more final races to go when the competition will get even stronger as the top third of the fleet combine to produce what will be a very competitive gold fleet. 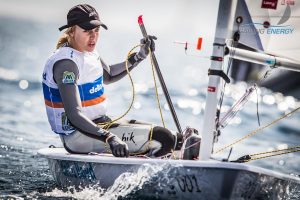 The women were also racing on a different course area further out to sea. They had a slightly better wind up to ten knots and started before the men after a shorter postponement. The first fleet were into their second race before it was abandoned due to a change in wind direction and the wind dying.

Veronica Fenclova (CZE) maintained her slender overall lead still on a tie break after a scoring a reasonable 12th place in the first race of day, which she discards, and then delivering a strong third. “Every race here is difficult, ” exclaimed the Czech sailor. “The first race in my fleet was very light wind and the fleet split into two parts. I had an OK start and went left, got clear wind but it was still difficult. In the second race the wind was stronger and so I went left again which was better for me.”

Viktorija Andrulyte from Lithuania became the new challenger having scored the best results of the day, a first and fourth, to take second overall vacated by Min Gu (CHN) who slipped dramatically down the rankings to 25th scoring a 45 and 33.

Olympic silver medallist Marit Bouwmeester (NED) was pleased with her day’s results that moved her into third overall. She said,  “In the first race my old sparring partner Evi Van Acker and I rounded the top mark together at the top end of the fleet with me just behind. We worked through the fleet to finish first and second with me still behind. The second race was short and the wind was banging right to left. The important thing is not lose too many positions.” She was happy with her seventh and third place overall. 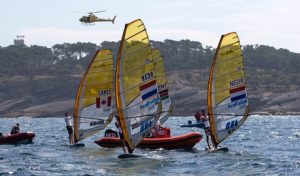 It was a day for France in the Men’s RS:X with three out of four races across two fleets going their way.

Le Coq is one of the in-form racers in the Men’s RS:X and was pleased with how things played out in Santander, “Today was really interesting because we had two different races. We went to Sardinero as expected and had 10-15 knots so it was nice conditions for us with planing. I had good speed but I was fighting with a lot of guys and finally I won the race.

“We then waited a lot as the wind was really changing today. We moved course for the last race and I won that too. It’s a good day to begin the worlds but there’s still a long way to go so we’ll see at the end. I hope to be a regular at the top throughout the rest of the days.”

Giard picked up a third in the second race and holds second overall. 2010 World Champion Piotr Myszka (POL) is third after a fourth and a second.

With a series consisting of 12 races there are plenty of points left to play for in both RS:X fleets. 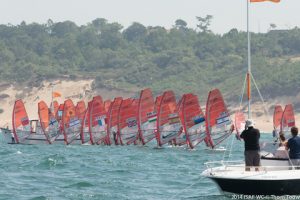 Picon, 2014 European Champion, came out flying and took the opening race victory. She backed it up in the second race with a further bullet and consolidated her exceedingly good start with a fourth in the third race of the day. At the early stages of the competition the French racer, who also took gold at the Aquece Rio International Sailing Regatta 2014, Rio Test Event, has a three point lead. The third blue fleet victory of the day went to Great Britain’s Bryony Shaw who is

In the blue fleet Demita Vega (MEX) took the first bullet and with a fourth and a discarded 17th she sits second overall. Eugenie Ricard (FRA) and Qiaoshan Weng (CHN) won the remaining blue fleet races. Ricard sits fourth and Weng is 13th.