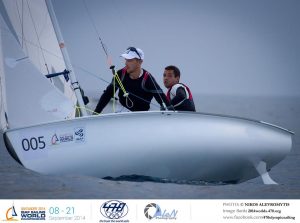 Sunday 14 September 2014 – The third day of racing at the Santander 2014 ISAF Sailing World Championships was a tough affair with light winds and a strong current testing the sailors across the six fleets on the water.

After a long wait ashore and a further one afloat waiting for the wind to arrive and stabilize there was little chance the 6-8 knot breeze would hang around for more than one race but in the end all of the fleets got some racing in. In the light winfd the current was again the dominant factor with several lines across the course areas. Add that to a few odd shifts and competitive fields and it made for an interesting day.

In the one Laser gold fleet race fortunes were changed by the black flag starting penalty after the fleet failed to start first time. Series leader Robert Scheidt (BRA) was one of nine sailors to be disqualified for breaking the start line early. His only consolation was that he was in the good company of current European Champion Tonci Stipanovic (CRO) and 2003 World Champion, Gustavo Lima (POR). 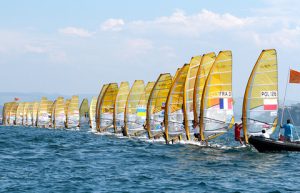 Andrew Maloney (NZL) had no such worries having a good second windward leg to climb from fourth to first on the second windward leg to lead and take the race victory. Maloney explained, “There were a lot of current lines out there. I had a great start and went right for the current and rounded the top mark about fifth.

“On the second upwind I got a good lift off the current on the right and held on for a shift that got me up to first.”

Charlie Buckingham (USA) started at the starboard end and also went right for the current. When finding out about his elevation to second overall after finishing behind Maloney he said, “We have not had much hiking so far in this championship and there is still a long way to go. I have got to stay focused.”

Tom Burton (AUS), who maintained his third place overall after scoring an eighth, described his race as, “Another solid day. The breeze was up and down and the tide was a big factor. It was a bit snakes and ladders. If you tried too hard and changed too much you could easily miss both the current and the wind changes. At least I don’t have to change the third place sticker on my sail.”

Burton is the only man to have all his scores in single figures.

Meanwhile with chops and changes across the fleet the new overall leader is Nicholas Heiner (NED) who took a solid third, “I had a comfortable lead in the first beat and good downwind then somehow on the second beat, I just got outside the current line like about 5 metres outside and the guys below me just drove through my dirty wind. It is a different kind of sailing but I will sleep well tonight as always.” 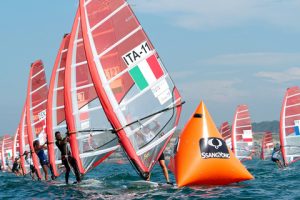 Starting at the first attempt Dongshuang Zhang (CHN) and Josefin Olsson (SWE) hit the front of the Laser Radial gold fleet at the first mark and remained there for the rest of the race. Olsson said, “It was a good race. I had a really good start at the pin end and tacked straight away across the fleet and it was good. I rounded the first mark just behind Dongshuang and then we were able to control the fleet for the rest of the race.”

Behind them Silvia Zennaro (ITA) was steadily closing the gap from 10th to finish a close third to Olsson.

Zhang and Olsson sailed themselves into first and second overall whilst the previous leaders Veronica Fenclova (CZE) and Victoria Andrulyte (LTU) suffered a 31st and 24th that they have discarded to leave them fourth and fifth overall. Fenclova explained, “It was really crazy. I had a really bad start and normally, on this course, the right pays because of the current but after our start there was a left hand shift. But really it was the start that hurt me.”

Marit Bouwmeester (NED) is following her declared conservative route and posted an eighth to leave her as the only sailor with all single figure results. If the present light conditions and tricky currents remain these could be very valuable.

The Women’s 470 fleet has been split into two fleets, yellow and blue, with two races held for each on the opening day. A light wind and shifty race track combined with strong current made consistent results a real challenge.

Consistency is the name of the game and the eight teams securing top 10 results from both races, were rewarded with top ten places on the leaderboard.

Phenomenal racing from 2013 and 2014 470 Junior World Champions Maelenn Lemaitre and Aloise Retornaz (FRA) puts them in pole position in the 30 nation fleet. They recorded a 2-1 scorecard. It’s early days, but to lead the World Championship fleet of Olympic medallists and multiple World Champions is a massive boost for the pair who are also four places ahead of their World #1 team mates Camille Lecointre and Helene Defrance (FRA).

Brazil’s 2008 Olympic bronze medallist, Fernanda Oliveira and crew Ana Luiza Barbachan are in second overall from results of 1-3. “We are very happy to open with a win and it was a special day, but there is a week to go, so we will keep on working, ” said Barbachan. Explaining their race, she continued, “At the first mark, we were already in the top five, so it was easier to take the shifts from the left and find the advantage.”

A 5-1 from China’s Huimen Feng and Lizhu Huang puts them in third overall. Coached by renowned Olympic gold and silver 470 medallist Kevin Burnham, the three Chinese 470 women teams will be looking to equal or better the bronze medal secured by their now retired team mates at the 2013 470 Worlds.

Olympic Champions and defending World Champions Polly Powrie/Jo Aleh (NZL) are in eighth overall. “It was a solid day for us, we didn’t lose it today and have a couple of keepers, ” explained Powrie. Aleh took over, “Our goal here is to qualify the country first and everything else is a bonus. It will be a long event and the conditions are looking pretty tricky for the rest of the week.”

Challenging weather conditions and a strong current meant just one race was completed for the 73 teams in the yellow and blue Men’s 470 fleets.

The blue fleet were up on the race track first and taking the opening race win were Stuart McNay and Dave Hughes (USA) in an early boost to their nation Olympic qualification hunt. They took a clean lane off the start, and then chipped their way through the boats ahead, gaining places on the wind shifts.

“This is certainly how we would want to start our Championship, ” said Mcnay. “We are happy with how we sailed and we thought we did the process well and good systems are in place.” 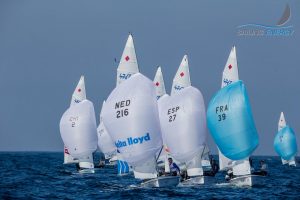 Sofian Bouvet and Jeremie Mion from France, the 2009 and 2010 470 Junior World Champions, took the win in the yellow fleet, pursued by team mate Nicolas Charbonnier and Acielle Nebout-Javal in second and brothers Julian and Philipp Autenrieth from Germany in third.

Defending World Champions Mat Belcher and Will Ryan finished sixth in the yellow fleet. For Belcher and Ryan, the 2014 World Championship is not just about securing their second back to back 470 World title partnership. It is as much about continuing Belcher’s dominance of the 470 Class, and continuing the run of four successive World Championship gold medals. As well as last year’s win with Ryan, Belcher took gold at the 2010, 2011 and 2012 470 Worlds with former crew Malcolm Page. A successful defence in 2014 would surely mark an unprecedented achievement across any Olympic Class.

The Women’s RS:X have been fastest class to complete their schedule in Santander with the fleet happy with racing and the Race Committee work.

There was big confusion on the finishing line as the finishing buoy and boat had swapped decision but with the jury working on the decision the current results are provisional.

Over the the racing and Lilian de Geus (NED), who finished on the podium at the Aquece Rio – International Sailing Regatta 2014 said, “Looks like it’s a lightwind event, ” and that pretty much sums up the general feeling for the entire fleet with tough light wind racing, tricky breeze, lots of pumping and tired sailors.

Malgorzata Bialeck (POL) who is positioned fourth overall is one of the happiest racers on the course having completed a Half-Iron Man Race in August so she is very much ready for the hard aerobic work in Santander.

The top ten girls are all within 10-13 points of each other and it promises to be a tough and interesting fight as the competition develops.

Charline Picon (FRA) continues to lead the way and with five races completed the qualification series has concluded. As it stands 15 nations enter the gold fleet and with 13 Rio 2016 Women’s RS:X spots up for grabs in Santander there’s world championship glory and national spots up for grabs.

Contrary to the female fleet the Men’s RS:X found the going tough with a long wait for breeze on the water which led to some frustrations.

Nick Dempsey (GBR), Olympic medallist from Athens 2004 and London 2012, was pretty happy with his day’s solid performance. With a long day on the water he kept his composure and recorded a 1-4 and he climbs up into second place.

Piotr Myszka (POL) leads the fleet after a 10-2 on the race track but there is real drama developing in the Men’s RS:X fleet with just five points separating places one to ten.

With the current forecast the battle will be even tougher and extremely interesting for spectators watching the action.

Meanwhile the Rio 2016 Olympic Laser spots were snapped up and we caught up with a few happy qualifiers who can now focus on World Championship glory.
URL – http://youtu.be/4dvS1hehuVg
Embed – <iframe width=”560″ height=”315″ src=”//www.youtube.com/embed/4dvS1hehuVg” frameborder=”0″ allowfullscreen></iframe>