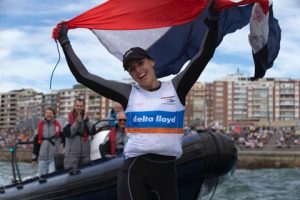 The Laser Radial fleet were first away on the Medal Race course at 13:15 local time. In a gusting southerly 20 knot wind blowing straight on to the stadium breakwater Evi Van Acker (BEL) won the start at the committee boat and was one of the first to tack off to the starboard side of the course.

Meanwhile Marit Bouwmeester (NED) went for speed off the start and sailed off more to the left before crossing to the right hand side. Van Acker led Mathilde de Kerangat (FRA) and Alison Young (GBR) round the first mark with Bouwmeester 20 seconds behind in fourth. The backwash from the spectator breakwater was causing some awkward waves on the downwind leg but all 4 boats got to the halfway point of the 30 minute race without incident. The second upwind was all about change. Acker led a group to the left whilst Bouwmeester played the middle to right won. Defending champion, Tina Mihelic (CRO), was best placed to take advantage of a right hand shift and she jumped from eighth to first.

Van Acker failed to cover the right hand side of the course and paid a high price dropping to eighth on the next rounding of the windward mark, one place behind Young. Bouwmeester maintained her fourth place which was all she had to win the title. In fact she gained a place on the downwind leg to the finish third to regain the title she won at the Perth 2011 ISAF Sailing World Championships in Australia.

In amongst a crowd of Dutch press and TV Bouwmeester said, “I am really happy to come away with a win. I had a good start with a good back swell. It was kind of tricky on the first upwind. I wanted to go right but didn’t quite make it. I was happy with my second upwind. I tried to defend a little watching the girls on the left but it was tricky. The back swell was awesome.”

At the start Nick Thompson (GBR) won the committee boat end above Phillipp Buhl (GER) and Nick Heiner (NED). Further down the line defending champion, Robert Scheidt (BRA) powered off the line and tacked on small shift to pass behind all the boats that were to windward of him. It got him to the favoured side of the course and when he tacked back he had moved up to fifth which he turned into fourth rounding the first mark behind New Zealander Sam Meech, Heiner and Buhl.

Overnight leader, Tom Burton (AUS), stuck to the left hand side of the first windward leg and struggled to get across to the favoured right and as a result rounded last with championship title slipping through his hands.

Heiner took his chance and held his second place on the downwind leg before finding an extra gear, pulling out a one minute lead on the next upwind whist those behind “played mix the places” in the shifting conditions. After that Heiner only had to navigate the back wash downwind and finish to take the title which in spite of a scary roll as a gust hit just before the finish. Thompson had worked his way up to fifth in the race and second overall before he got caught in a backwash wave on a gybe just before a tight finish. In a close fleet the stall was enough to drop him to eighth place behind Burton in seventh and drop him to third overall with Burton taking the runner up position.

After racing Heiner said, “Going out to the race I knew it was going to be a battle between the five us so I just wanted to give it everything I could and do my best. I wasn’t nervous. I was really keen to get racing. The start was difficult. I had a lane but it was really a case of who got the first wave off the break water. It took me a little time to find my rythym I struggled a bit on some chop but half way up the first beat I found it. Pretty much after that I got going.

“When I went round the downwind mark I look around and pretty sure the next shift was coming from the right. I found a nice set of waves on the right with some pressure and then pretty much planed up wind for half of the beat. It was awesome.”