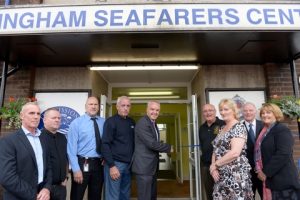 A vital part of Immingham’s port community was officially reinstated recently with the opening of the Mission to Seafarers, which suffered tens of thousands of pounds-worth of damage in December’s tidal surge. The ceremony was performed by Associated British Ports’ (ABP) Director Humber, John Fitzgerald.

The Mission, which is run jointly by the Apostleship of the Sea and the Mission to Seafarers, was forced to close for nine months following the surge so the rooms could dry out and repairs and refurbishment could take place. ABP assisted in the days immediately following the event by providing manpower and resources, as well as a temporary base, so the rebuild could begin without disrupting the Mission’s valuable work, as ABP Director Humber John Fitzgerald explains.

He said: “It was a terrible night, but we were immensely thankful that no one was hurt and when faced with such tremendous adversity, people, including our own staff, pull together and achieve amazing things.

“The destruction of the centre felt like the soul of the port had been broken – it provides an extraordinary service for these unsung heroes, but as Colum and his team have demonstrated, out of the ashes opportunities arise, and this new and improved centre offers even better facilities for visiting crews.

“This is the UK’s most important port, with world-class terminals and it’s fitting that we now have a world-class seafarers centre.”

The Mission to Seafarers provides chaplaincy services and recreational facilities to visiting seafarers and is a vital lifeline for seafarers, many of whom may have been at sea for many weeks and months with no contact with family or friends.

It also offers free wifi and IT facilities, a well-stocked shop, games rooms and relaxation areas, and a chapel for quiet reflection. The chaplains also visit ships berthed at the port and often take seafarers on visits and they can also provide clothing and food for those in need.

Port Chaplain Father Colum Kelly described the events of the evening of the 5th December 2013 as ‘devastating’, but from the ruins of the building, he and his army of volunteers saw opportunity.

“I was devastated when I saw the building for the first time following the surge, ” said Colum. “The place was destroyed, but not only that, it was as if all of the joy and the happiness that the building had seen over the years, had been completely washed away by the flood waters.

“I stayed in the building throughout the project to oversee the work because when we decided to rebuild we were given the chance to make the centre even better than it was before, in fact we saw as our duty to do that.

“The staff here and many other businesses and individuals including ABP, made sure that was possible and the opening was full of exhilaration and joy. The UK’s number one port now has the UK’s number one seafarers centre.”