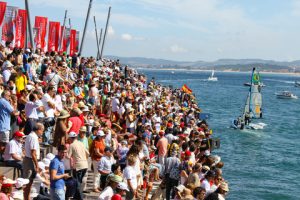 21 September 2014 – Issued on behalf of ISAF – Four more world champions were crowned at the Santander 2014 ISAF Sailing World Championships as racing wrapped up in the Spanish City on a day blessed with glorious sunshine.

After a short racing delay in Santander a variable 6-11 knot breeze blew across the Duna race course with the 49erFX, 49er, Finn and Nacra 17 Medal Races entertaining a packed grandstand.

2, 500 to 3, 000 fans watched the action unfold as Martine Grael and Kahena Kunze (BRA) took the 49erFX title in a dramatic Medal Race. Peter Burling and Blair Tuke (NZL) had 49er gold sealed ahead of the final day and stylishly showed what they’re all about by taking the bullet.

Giles Scott (GBR) wrapped up Finn gold with a solid race whilst Billy Besson and Marie Riou (FRA) walked away convincing winners in the Nacra 17, finishing 38 points clear of their rivals.

In the top billing match up of the day, it was who beats who in the women’s skiff class.

Recent European Champions, Ida Nielsen & Marie Olsen (DEN) were just ahead of Martine Grael & Kahena Kunze (BRA). The day got off to a slow start as the breeze built and then the teams were called to the race area. “My heart was thumping in the pre-start, ” said Martine Grael when asked about the significance of the moment.

It was an up and down race in about 6-8 knots of wind. The two leaders covered each other closely, and in the end the Brazilians emerged as world champions. They celebrated emphatically with big smiles, hugs, and some swimming for the crowd. This is their first world championship though they have been contenders at all of the major regattas this year.

It was disappointment for the Danes, who have been riding a high since July when they won both the Junior World Championship and the European Championship back to back. It is a tremendously competitive fleet, however, and it is unlikely we will see any team dominate for too long.

In third place were Giulia Conti and Francesca Clapcich (ITA) who were guaranteed their position so used the race to enjoy themselves. Conti has been sailing recently with a male team mate while Francesca was out injured, and was relieved to have her normal crew back and to make it on the podium.

The Medal Race was just like the regatta, dominated by New Zealand. Peter Burling and Blair Tuke (NZL) had an insurmountable lead going into the final. They had a middling first beat, but then made their move with a gybeset on the first run. They got into the lead by the bottom marks and never looked back, taking a huge win in the Medal Race to cap their huge win in the regatta. The duo are winning regattas and races by margins never seen before in the 49er, and look unstoppable. Time will tell whether they can hold this kind of form all the way through to Rio.

The real fight in the Medal Race was for the silver medal in the battle of Olympic gold medallists. Jonas Warrer, the Beijing 2008 Gold medalist with Anders Thomsen (DEN) were only two points off the London 2012 Gold medallists, Nathan Outteridge & Iain Jensen (AUS).

Outteridge and Jensen got off to a good start and were third around the first top mark while the Danes were back in eighth. However, there were position changes on every leg of the race, and on the final upwind the Danes got past the Aussies to secure their silver medal, leaving the Aussies to settle for Bronze.

The crowds were so big that it was standing room only, and they reserved their biggest cheers for the Paz brothers from Spain, who get their highest ever worlds finish with a 10th place.

Giles Scott (GBR) made sure of the Finn World title, for the Finn Gold Cup, after leading early on in the race and finally crossing in fourth. All he had to do was finish cleanly, but wanted to make a good race of it as well as he explained, “I just went out and sailed my own race and kind of forgot what was going on with the other guys. You can try and get out of their way but I was racing as much as they were. I wanted to go out on a high, and I managed to almost do that.

“It’s a been a great season for me and I can’t really think of a better way to round it off that with the world title. It’s been a great event and I am really pleased with the way I have sailed, and there’s always a lot to learn from it, but I’m over the moon about it.”

On his dominance throughout the event, “I never really let myself think like that. But the event has gone really well. I have sailed well from day one and managed to keep it going through the regatta.”

The Medal Race was won by Ivan Kljakovic Gaspic (CRO), who took the lead on the first downwind and held it to the finish. Already in second overall, this win gave him the silver medal by a comfortable margin.

He said, “The week has been great for me, a really excellent performance. Today I knew I had to be relaxed and keep calm and I did exactly that and it put me right into the lead. Then I had really clear lanes through the race and really good moments. I sailed pretty consistently today, as I did all week, and it it turned out to be a winning combination for me.

“It’s an important event for me because after a couple of years of some general setbacks, I really made a great performance here, with all my team behind me. This really makes me happy and all of this proves that we are working in the right way and the progress is just going forwards and I hope in Rio it is going to be even better.”

Ed Wright (GBR) went into the Medal Race in fourth, just one point behind Jonathan Lobert (FRA). Initially Lobert had the upper hand, but that all changed on the second lap when Wright found better pressure on the left and moved up to third.

He said, “On the second beat I got a gust on the left hand side and moved up to third and held that all the way. It was a nail biting race and I really enjoyed sailing in it. It means a lot to me to get a medal at the worlds and I needed this medal, so really happy with that.”

“It’s been a hard week after I had a OCS early on and I’ve been struggling a bit with that. But it was all to play for today and it was a real fun race to be part of. I now just need to wind it up a bit more and try to catch Giles.”

French team Billy Besson & Marie Riou were already assured of the first place before the start of the Medal Race. But from second to sixth there were a lot of possible changes. And Argentine team Santiago Lange & Cecilla Carranza Saroli raised from 5th to 2nd overall position with Jason Waterhouse and Lisa Darmanin (AUS) taking silver.

After a short postponement the sea breeze came up and stayed during the afternoon, which made it possible to start at 16:10. With thousands of sailing fans on the spectator Dune and a lot of spectator boats on the water it was an amazing finale to the ISAF Worlds.

Besson and Riou had sealed the deal before the Medal Race and enjoyed themselves on the race course taking a third which ensured the celebrations commenced.

Meanwhile the fight went on around them with plenty of permeatations.

After the start, racing was very close between Argentine team Lange & Carranza Saroli and the Swiss team Matias Buhler and Nathalie Brugger. At the first upwind mark Buhler and Brugger were leading the Argentines. But at the first downwind gate Lange took over to lead directly followed by the Swiss. Lange was sailing very strong but at the end of the third lap just before the finish the Swiss team were able to pass him and take first but Lange and Saroli still advanced up the leader board to take silver.

Lange was delighted after racing, “For us it is really a very special day. It was difficult sailing in the Medal Race in the harbour area. Tricky race and you have to stay very sharp all time. Only in the last minutes we lost some distance and Matias passed us. We are very happy with this result. Our next goal will be the Olympics. Still a long way to go, but with this result we are very motivated to reach our dream.”

Meanwhile the Swiss were happy with a Medal Race victory and sixth overall, “In Rio we won the Medal Race. This week in Santander we didn’t sailed our best races. Before starting this Medal Race we decided to go for the best and take some risks. We didn’t have anything to lose and wanted to try to show it was no coincidence we won in Rio. This race we sailed very well and are super happy we have won the medal race. This will give us a very good start for our new season.”

Australian team Waterhouse & Darmanin kept their third position in the overall result with a fifth in the Medal Race.