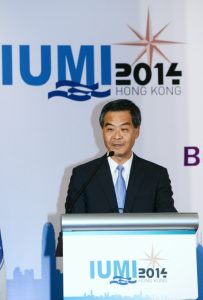 by James Brewer, in Hong Kong.
Marine insurance, already reaping gross premiums in Hong Kong at the rate of US$660m a year in Hong Kong, will be a key contributor to the enhancement of maritime services in the Asian centre, the Chief Executive of the Hong Kong Special Administrative Region of China has pledged. And more insurance products will be denominated in the main Chinese currency, renminbi.
Speaking in his home city at the opening session of the 2014 conference of the International Union of Marine Insurance, the Hon CY Leung said that Hong Kong boasted the highest concentration of insurers in Asia.
“There are currently more than 150 sanctioned insurers here, with 88 of them authorised to provide marine and cargo insurance. This includes seven of the 13 protection and indemnity clubs from the International Group of P&I Clubs – the largest cluster of P&I club representatives outside London.
“And favourable developments in the insurance and maritime industries are clearly benefiting our local marine insurers. In 2013, gross premiums of marine and cargo insurance amounted to HK$2.1bn, which is equivalent to US$260m. The news is even better this year. In the first half of 2014, premiums reached HK$1.8bn, equivalent to US$230m.
Referring to the reforms,  open door policies and the economic growth of China in the past 36 years, Mr Leung said that from day one, Hong Kong, including the many foreign businesses based there, has been part of the China success story.
“We have built up the largest talent pool of China experts, the best knowledge base of business operations on the Mainland of China. We would like to think that Hong Kong is the Chief Knowledge Officer and the Chief Information Officer of China.”
He said that since the return of Hong Kong to China, “we have been offering the combined advantages of ‘One Country’ and ‘Two Systems.’ When your business is in Hong Kong, you are in China. But you are in a city in China that practices ‘the other’ system.”
Hong Kong, the world’s eighth-largest trading economy, and a leading international financial centre, had benefited from the global business shift, as had the companies that work with Hong Kong.
“When it comes to maritime services, we’ve long been a major player. The Hong Kong port remains one of the world’s busiest. It’s currently supported by some 380 liner services a week; these connect to some 550 destinations worldwide.
“The Hong Kong Shipping Register is the fourth largest in the world, with a total gross tonnage of 89m. This city’s 700 shipping-related companies offer a flotilla of maritime services: ship management, broking and chartering, finance, marine insurance, maritime law and arbitration, support shipping services, and much more.
My government is committed to ensuring that Hong Kong remains an international maritime centre. We also have the support from the Central Authorities of China. The National 12th Five-Year Plan clearly sets out the Central Authorities’ support for Hong Kong to consolidate and enhance its status as an international centre for shipping.
“By ‘enhancing, ‘ it does not mean doing more of the same thing. It means diversifying our products and services. We are well positioned to develop high value-added maritime services, capitalising on our geographical and institutional advantages.
Mr Leung went on to say that Hong Kong is well positioned to serve as a springboard for Mainland maritime companies looking to go global.
“We are equally primed to provide services for overseas maritime companies eager to explore the Mainland China market. In short, Hong Kong has what it takes to become an important international maritime centre for the Mainland of China and the Asia-Pacific region in general. The burgeoning renminbi business in Hong Kong is a notable example. With the Central Government’s support, Hong Kong has emerged as the world’s largest offshore renminbi centre, offering cross-border trade settlements, fundraising, financing and asset management. Given the increasing use of the currency in cross-border trade settlements, we see promising business opportunities for marine insurance products denominated in renminbi.
The chief executive insisted on the significance of arbitration cases handled by Hong Kong. The Hong Kong International Arbitration Centre handled 456 arbitration cases in 2012, of which 60%, or 274 were maritime-related. The Office of the International Court of Arbitration in Hong Kong handled 759 domestic and international arbitrations in the same period.
“Meanwhile, I note that the Supreme People’s Court of the PRC announced earlier this month that China has handled the greatest number of maritime cases in the world. This would be another area where Hong Kong can further develop and in this regard, I am pleased to let you know that the China Maritime Arbitration Commission will set up a branch office in Hong Kong later this year, the first branch office of CMAC outside the Mainland of China.”
C Y LeungChinaHong KongHong Kong Special Administrative RegionIUMI
0 comment
0
FacebookTwitterLinkedinEmail