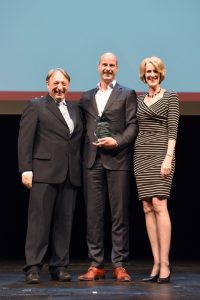 Bolidt has been named as one of the winners of the 8th Seatrade Insider Cruise Awards, announced during the Seatrade Med Cruise Convention 2014 – the Mediterranean’s most prestigious cruise event.  Judged by an independent panel of experienced cruise industry specialists, the Seatrade Insider Cruise Awards are among the highest accolades in the cruise industry.

Bolidt secured the ‘Supplier of the Year’ award, an award given to a firm that has provided an exceptional quality service, product or innovation to the cruise sector over the past 12 months.

“We are honoured that the jury have chosen to recognize Bolidt as an exceptional leader in the cruise industry and we will continue to lead the market in delivering innovative solutions”, commented Jacco van Overbeek, Bolidt Director Maritime Division, who collected the award in Barcelona, “Winning in this category in our 50th anniversary year is even more memorable, it’s a great testament to all that the company has achieved thus far.”

Since its set up, Bolidt has been working to unlock the potential for traditional materials to be replaced with synthetic solutions, especially in a range of harsh operating environments. Bolidt is committed to the development of products that are both environmentally conscious and safe but also support the interior designer to fully realise their imaginations in the design process.  One such development is the recently launched new colour range for Bolideck® Future Teak, the environmentally friendly decking system.