On the “Waverley” for a magical mystery tour…* 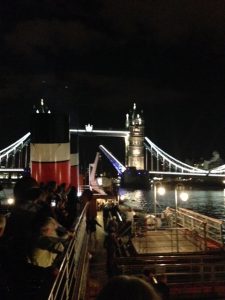 The “Waverley” just about to pass The Tower Bridge

The Classic Annual Evening Cruise onboard the last sea-going Paddle Steamer in the World, The “Waverley”,  took place last Friday the 26th of September, a bit earlier than last year’s cruise but in a very idyllic environment given the prevailing weather condition!

Once again, RINA London Branch with its spearhead Jonathan Morley and over 80 new and old faithful supported this noble cause for the classic cruise down the River Thames sailing through the floodlit Tower Bridge, gone past Canary Wharf, The Millennium Dome and through the famous modern landmark – at least of its time, the Thames Flood Barrier.

Amongst the guest/passengers where Tony Brandon, Peter Watson and Christine Gregory from Lloyd’s Register; Harry Gale from The Nautical Institute, Stephen Brown from the IMO as well as Kalai – Naidoo and Mr. Pindo with his family. Peter Jenkins missed the event as did John Faraclas… 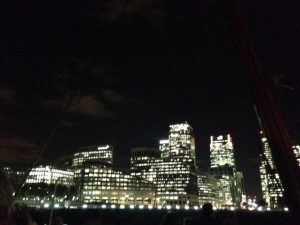 Excellent food, drinks and live jazz music by The band complemented the atmosphere of this super gathering. We asked one of the passengers, lawyer Stavroula Gavridi who described the event as:”I would say that it was a magical and romantic night, which takes through the modern city of London with all the sightseeing, but at the same time it takes you back some centuries ago to the TITANIC period and makes you feel like you were there.”

See you onboard all going well net year! 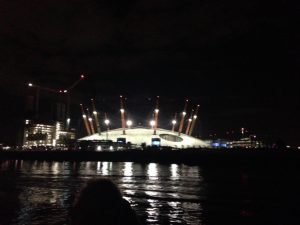 The Millenium Dome or O2 or whatever we can call this modern monument which can be seen even from space…!

The “Waverley” was built in 1947 and its in its 65th  year of service and its worth joining the “Friends of Waverley” in supporting her maintenance and continuous trading. By becoming a Friend of “Waverley”  you will be making a real difference to keeping “Waverley” sailing.  You will have the satisfaction of knowing that you have helped preserve a piece of maritime heritage and you will be supporting  a world class attraction.  Hope to see you next year on board!

* to paraphrase the Beatles song, and herebelow the  Magical Mystery tour…