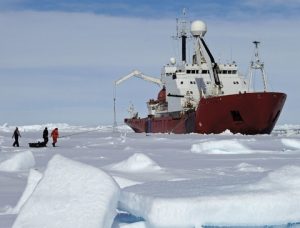 In August the bow area of the underwater hull  of Royal Research Ship (RRS) James Clark Ross was coated with Ecospeed in Frederikshavn, Denmark. The ship is one of two ice-strengthened research vessels operated by British Antarctic Survey (BAS).

The other, RRS Ernest Shackleton has been sailing with Ecospeed on her hull for five years without requiring repainting. Despite battering its way through ice up to 2.5 meters thick with a high content of gravel and volcanic lava adding to its abrasiveness, the hull coating remains virtually intact and undamaged. This is in strong contrast to when the Shackleton’s hull was still covered with a conventional ice-going underwater hull coating and almost the entire hull was practically stripped to bare, unprotected steel in between dockings.

This excellent result led BAS to coat the bow area of RRS James Clark Ross with Ecospeed. The vessel can steam at a steady two knots through level sea ice one meter thick. The bow area has to endure a constant impact with the ice and needs the best possible protection. Ecospeed low friction coating demonstrates excellent attachment to the hull and successful resistance to extremely icy conditions. The coating has proven an ability to withstand the harshest winter conditions on numerous occasions, as BAS has experienced firsthand.

Ecospeed has received the Lloyd’s Register certificate that recognizes the coating as an abrasion resistant ice coating. This allows owners of vessels intending to navigate in ice conditions to reduce the scantlings of the ice belt, the area on the bow just above the waterline that is most prone to mechanical damage from sailing through ice, if this area is coated with Ecospeed.

British Antarctic Survey (BAS) is a component of the Natural Environment Research Council (NERC). Based in Cambridge, United Kingdom, it has, for over 60 years, undertaken the majority of Britain’s scientific research on and around the Antarctic continent.

Their two ice-strengthened ships sustain the Antarctic operations. While RRS Ernest Shackleton is primarily a logistics ship used for the re-supply of stations,  RRS James Clark Ross has some of Britain’s most advanced facilities for oceanographic research on board and is the platform for most of the marine science undertaken.

The vessel was launched in 1990 and was named after British naval officer and explorer Sir James Clark Ross (15 April 1800 – 3 April 1862). He is remembered today for his exploration of the Arctic with his uncle Sir John Ross and Sir William Parry and his own expedition to Antarctica.

To assist passage through heavy pack ice, a compressed air system rolls the ship from side to side freeing the passage. RRS James Clark Ross is equipped for geophysical studies and has large aft and starboard decks for scientific equipment deployed by aft and midships gantries. The ship is designed with an extremely low noise signature to allow sensitive underwater acoustic equipment to operate effectively.

Each year she leaves the UK for the Antarctic laden with supplies for British Antarctic and sub-Antarctic bases. She stays in the southern ocean for the austral summer carrying out oceanographic and biological survey work in between supplying and re-supplying the bases and moving personnel around. Before the start of the Antarctic winter, she heads back to the UK again returning equipment, garbage to be disposed of and returning Antarctic base members.  They have been away from the UK for periods ranging from just a few months to nearly two and a half years.

Due to its unique composition, Ecospeed is not only the best protection available for underwater hulls of icebreakers and ice-going vessels, the coating also provides excellent hull performance and is the easiest ice-going paint to apply and maintain. The coating is the perfect way to offer a ship like the RRS James Clark Ross a lasting and full protection against the icy conditions it is faced with.