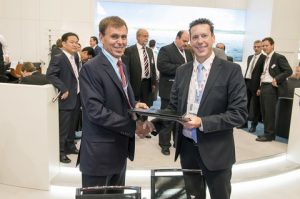 Plans for developing the fleet managed by Ahrenkiel Steamship are already underway. “Our focus is on building up a strong fleet, maximizing the quality of our services and increasing our efficiency. DNV GL has a longstanding track record of excellence and reliability and having a strong expert technical partner like DNV GL ensures that we can increase our competiveness while delivering uncompromising quality to our customers”, said Nick Topham, MD of Ahrenkiel Steamship.

“We are very pleased that Ahrenkiel Steamship have entrusted us with their fleet. They have a young and modern fleet of vessels – and we will work with them to build on this foundation. Their focus on delivering quality and efficiency matches our own and by consolidating their entire fleet at DNV GL they will be able to draw on a breadth of our services and expert technical support that is unique in the industry”, said Tor E. Svensen, CEO of DNV GL – Maritime.

Top jobs, buying ships, and the value of internships