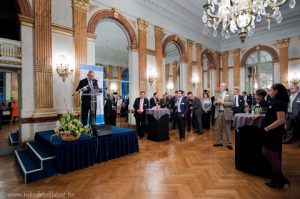 The European Federation of Inland Ports (EFIP) celebrated its 20th anniversary on 1 October 2014 with a reception in the Salle des Glaces of the Parliament of the Region of Brussels. The event, which was organised in cooperation with the Port of Brussels, attracted more than 150 guests from all over Europe, including representatives of the European Institutions, Member States and River Commissions, Port Directors, and other transport stakeholders.

The association used this occasion to unveil its new logo. Combining elements of rail, road and barge traffic, the new logo puts a spotlight on the multimodal nature of inland ports’ activities. The colours blue and green reflect the sector’s strong link with the water as well as its commitment to contribute to an environmentally sustainable transport system.

During the evening, guests also had the opportunity to view an exhibition entitled “Floating Ideas”, in which EFIP presents innovative projects in inland ports from three thematic areas: Innovative Logistics, Protecting the Environment and Positive Port – City Relations. The exhibition highlights the diversity of activities in inland ports and illustrates the commitment of the sector to innovate and develop solutions that benefit society.

EFIP President Hans-Peter Hadorn, who had been elected earlier in the day, said: “As multimodal hubs, inland ports bring together inland waterway transport, rail and road as well as the industries that settle in ports to benefit from the multitude of convenient transport options. This allows us to bundle cargo flows and shift them onto the sustainable modes of transport inland waterway and rail, which is efficient and green. Inland ports are therefore a key element for the successful development of the TEN-T corridors.”

Rudi Vervoort,  Minister-President of the Brussels Capital Region, said:  « In Brussels we are very well aware of the challenges every inland port has to deal with. Therefore, not only the role of the port in the field of transport, but also the area surrounding the Canal gets special attention in the regional policy declaration of my government. That is the reason why a Canal Plan has been conceived. This plan aims to implement a strategy, an action plan that allows for a harmonious coexistence of housing, facilities and urban economy. To me the canal zone symbolizes the renewal of Brussels. »

Michael Cramer, Chairman of the European Parliament’s Committee on Transport and Tourism said: “I congratulate EFIP for 20 years of commitment to making inland ports genuine intermodal hubs. The European Parliament is convinced that inland navigation can only realise its full potential as a sustainable means of transport with efficient ports. If efficiency and sustainability are combined, inland ports have a bright future.”

Representing the European Commission,  Olivier Onidi, Director for the European Mobility Network in DG Movesaid: “EFIP has a longstanding record of providing substantial contributions to the promotion of inland ports as key facilitators for bringing about the performing multimodal network Europe needs for its prosperity and global competitiveness. I congratulate EFIP with its twentieth anniversary and look forward to continuing the close dialogue between the Commission and EFIP in the future.”

During its General Assembly on 1 October, the European Federation of Inland Ports (EFIP) elected Hans-Peter Hadorn, the CEO of Port of Switzerland (Basel) as its new President. He succeeds Jean-Louis Jérôme, Director of the Port of Strasbourg, who had held the presidency since 2012.

Born in 1958, Mr Hadorn has a background in political economics and business economics. From 1995 to 2005, he worked for the Swiss Federal Railway company SBB, first as Head of Safety and Security and later as Head of International Production, Head of Strategic Planning and Executive Board Member of SBB Cargo.

Since 2005, Hans-Peter Hadorn has been at the Head of the Port of Basel, which merged with other neighbouring ports in 2008 to form Port of Switzerland.

Mr Hadorn is a Swiss Commissioner at the Central Commission for the Navigation on the Rhine (CCNR).

EFIP actively follows all developments in the field of EU policy of importance to inland ports and represents the inland ports vis-à-vis the European institutions and other international bodies. EFIP offers its members the possibility to exchange information, expertise and best practices with colleagues in other countries.

smartPORT TV – Deepening of the Elbe river in Hamburg