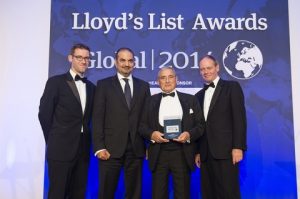 Chairman Ravi Mehrotra CBE, from Foresight Group in London was honoured the Life Achievement Award  on Tuesday 30th September at the Lloyd’s List Global Awards for his long time career.

I am extremely lucky and privileged that I met Ravi in the 80s when he was setting up Foresight Group in London. The company’s reefer ships were Panamanian, and I registered all of them through the Consulate of Panama in London, when I was the Head of Shipping. Foresight was (and still is) a company that distinguished themselves through their passion and eagerness to do everything by the book. The documentation was always in order, and Philippa Wright, Ravi’s right hand woman, an excellent organiser had everything under control. I am very lucky to have witnessed how the company (and family) grew.

In 2008 as President of WISTA-UK, I asked Ravi to become an Ambassador for the association, to help us attract members.  Indeed, he not only accepted, but also became a sponsor.

Ravi has been a good Ambassador,  he always has supported WISTA-UK  in any manner possible, and we are very grateful to him. He is a good Grandfather, a good Father, a good Husband and a good Employer. Ravi is a good friend. Ravi is a devoted business man.

I have read on the internet about Ravi that he is “A global leader in the shipping industry, the chairman of a multi-million pounds business empire, which he built entirely from scratch”. But  how to describe this unique man, a man who  in the middle of the London winter throws a BBQ in his back garden for over a thousand shipping people from all over the world? I would simply suggest that the best way is by reading his book “What’s in it for you”.

Ravi tells us: “The Sky is the limit, when your heart is in it. And it is the fire in your belly that defines your progress and achievement”.

When he was young, Ravi decided not to follow his father’s plans for his education, but to decide for himself, and once he graduated, as Ravi tells us in his book:  “My life as a marine engineer took me into the big world out there across the seas, to explore new territories and ultimately propelled me towards becoming a shipowner”, he added, “experience is the best school, they say, but also the most expensive one”.

His generosity is highlighted to the readers of his book when he shares his winning combination. According to his experience, Ravi’s Formula is:

(1)  To realise from the start that family is the bedrock of everything you might do.

(2)  To develop a burning ambition to become a shipowner of repute within a specific time.

(3)  To discover the whys of shipping after he had found the know-how of shipping expertise.

(4) To work out how to make time work for oneself, and time for our work.

(5) To learn the importance of added value.

(6) To teach yourself to take a risk, to push the boundaries, to calculate the odds and fly.

(7) When you find out the hard way, when you face disaster, you must stand and fight.

(8) To evolve a technique for remaining positively discontented with your own achievements.

(9) To find the means to turn mistakes into your own advantage.

(10) To let others decide whatever you have achieved, so they may speak for you.

We whole heartedly congratulate our dear WISTA-UK Ambassador Ravi, his family and work team.   Ravi is a very interesting person, with a unique humour and a great personality, and he has the perfect combination to be chosen for this worthy award.

All proceeds from the sale of the book will be donated to the non-profit institution that Ravi established in his home town of Kanpur – India, The Amer Maritime Training Academy (AMTA). The book is available in Paperback and Kindle.

Top jobs, buying ships, and the value of internships