SSA highlights marine insurance and finance as areas to develop 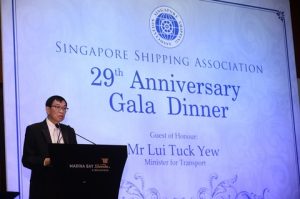 Singapore has to further develop and strengthen the pillars of marine insurance and shipping finance if it is to be fully regarded as an influential International Maritime Centre, according to Singapore Shipping Association President Patrick Phoon.

Addressing a Gala Dinner to celebrate the SSA’s 29th Anniversary, Mr Phoon said work was underway to achieve these goals.

He told the gathering of over 2, 000 guests at the Sands Grand Ballroom: “Some of you may be aware that over the past year, the SSA Council had commissioned consultants to assist in producing reports in these two areas. In the field of marine insurance, a working group, headed by SSA Councillor Mr Tan Chin Hee, has been tasked to explore the creation of a Singapore War Risk Mutual that would take advantage of economies of scale to secure the best possible cover for crew and ships, thereby achieving significant cost-savings for Singapore shipowners.

“In the field of shipping finance, SSA Councillor Mr Lee Keng Mun heads the working group to follow up on some of the key recommendations proposed by the report with the aim of developing Singapore as the premier ship finance centre in Asia. Both projects are still work in progress and all I can say for now, is that there will be exciting times ahead, ” he said.

Giving thanks to the work of the Government in supporting shipping in Singapore, Mr Phoon said shipping was fortunate to have a government who listens very closely to the views of the industry. “Our Association has been maintaining close dialogue with our government and the relevant agencies, to continually reduce business costs, smooth out kinks in our current systems and increase productivity levels to help Singapore’s shipping industry maintain its competitive edge in these difficult times.

“I am very heartened to note that there have been many new and exciting opportunities to collaborate with the MPA over the past year – ranging from enhancing navigational safety, to increasing productivity and attracting talent and many more. For the Safety of Navigation Working Group which was formed recently, I understand that SSA members have been very forthcoming with sharing their best practices with the MPA to address navigational safety concerns in our waters, ” he said.

In the area of increasing productivity, a separate working group was formed to look into work procedures of shipping agencies and address the bottlenecks when dealing with other government agencies, he said. SSA members provided integral feedback that led to enhancements of MPA’s Marinet system. The system is now more user-friendly to facilitate faster clearance of port and shipping documents.

The SSA President said the SSA was pleased to have collaborated with the MPA on the ‘Smart Port Hackathon’ held in July. “As a judge at that event, I was awed by these 120 IT developers and designers, who, within 48 hours and with limited maritime knowledge, were able to produce prototypes of some very useful solutions. I look forward to seeing these prototypes further developed and implemented as this would spur Maritime Singapore to be future ready as international competition intensifies.”

Guests were reminded that next year is an important year for the country with Singapore celebrating its 50thAnniversary of Independence and the Singapore Shipping Association celebrating its 30th Anniversary. To commemorate the milestones, the SSA is collaborating with MPA and FOX channel to produce a documentary which will be aired on its National Geographic channel. Renowned photographer Michael Yamashita has been commissioned to capture the scenes for a book too.