How LLOYD’S survived a crisis – and came out stronger 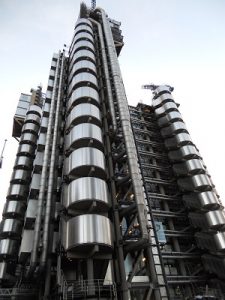 Andrew Duguid talks to lloyds.com about his new book, On The Brink, a dramatic account of Lloyd’s triumph over adversity in the 1990s. (source: Lloyd’s of London)

In the often turbulent world of insurance, the Society of Lloyd’s is seen as a paragon of underwriting discipline and financial strength. It wasn’t always so: for a brief period in its long history, Lloyd’s looked like it could fall.

On The Brink, a compelling new book by former Lloyd’s insider Andrew Duguid, details how some of the syndicates that make up the market suffered massive, spiralling losses that were passed on to their Names, the private investors that provided the Lloyd’s capital at the time – and how a group of remarkable individuals put the market back on its feet.

In a lucid account of events, Duguid explains the roots of the financial catastrophe that engulfed Lloyd’s 20 years ago, how it rescued itself and, most importantly, how the crisis helped transform one of the world’s best known insurance institutions.

Having joined Lloyd’s in 1986 from the Department of Trade & Industry, Duguid worked at One Lime Street through the market’s darkest period and witnessed its reconstruction and renewal process into the mid-Nineties first hand. “We had a strong sense then that the institution had come very close to the edge: our DTI regulator commented at the time that Lloyd’s ‘was running out of road’, ” Duguid recalls.

In the event, as Duguid describes in his pacey 300+ pages, Lloyd’s was rescued by a group of individuals who between them drew up an ambitious recovery plan and at the same time achieved a tough settlement for outside investors.

“In the context of what we’ve seen in the recent global financial crisis, it is interesting that the UK Government did not take out its cheque book – and Lloyd’s never asked for bail-out, ” Duguid says. “The Government did however authorise Equitas [the £15bn vehicle that assumed Lloyd’s pre-1992 liabilities] which was a hugely important decision.”

As well as creating Equitas to deal with legacy business, the rebuilding of Lloyd’s required two other pillars: a settlement with litigating Names and a continued supply of corporate investors to replace them. Such massive challenges required exceptional people to follow through.

Lloyd’s chairman Sir David Rowland (1993-97) and chief executive Peter Middleton (1992-95) emerge as key figures in Duguid’s account of the reconstruction of Lloyd’s. “David Rowland was the conductor, he led the show and inspired confidence in people. Peter Middleton [who died earlier this year] had an outsider’s perspective and was a good listener where Names were concerned, ” Duguid recalls.

“Robert Hiscox, who had founded one of the biggest Lloyd’s insurers, was important because he pushed the idea of corporate membership as an alternative to private investors with unlimited liability.”

On the Names side, pragmatic action group representatives like the Irish impresario Michael Deeny also feature as important players. Of over 30, 000 Names, 10, 000 were in serious financial difficulty and 40% of the total number were involved in litigation, according to the book.

“Deeny wasn’t fazed by the numbers and could bring Names to the table with Lloyd’s to strike a deal, ” according to Duguid.

In view of everything that happened, Names still have a future at Lloyd’s. “I’m not in the business of giving investment advice but many of the individual participants in Lloyd’s now do so in a way that protects them against unlimited liability, ” Duguid told Lloyds.com, “And they are an important addition to the diversity of Lloyd’s capital base.”

Duguid believes that Lloyd’s learned some enduring lessons from the crisis. In the book he says that Lloyd’s exhibited the resilience that has enabled it to outlast almost all commercial institutions anywhere.

Lloyd’s today has a far superior system of supervision, particularly the internal performance management regime put into place in 2003, he says: “The franchise performance operation is intrusive and demanding compared to the early 1990s and it maintains standards. Along with the increase in external supervision, it is a formula that works.”