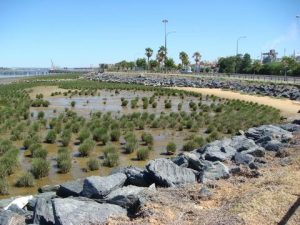 Friday, 10 October 2014 08:55 – This year’s ESPO Awards celebrate the role that ports can play in maintaining the natural environment and contributing to a sustainable future for all. The five ports shortlisted for this year’s Award, Huelva, Koper, Lisbon, Marseille and Rotterdam all demonstrate innovation in projects that improve environmental standards.

ESPO is proud to present the shortlisted projects, before the winner is announced at a ceremony at the Albert Hall in Brussels on 4 November.

Firstly, the project Ecological Restoration of Salt Marshes in the Port of Huelva, which has been submitted by the Port Authority of Huelva.

ESPO: Congratulations! You have been shortlisted for the ESPO Award 2014 together with four other port projects! Could you briefly describe your project?

The city of Huelva is located on the estuary of the rivers Tinto and Odiel. Its urban development is concentrated along the left bank of the river Odiel, where the infrastructure of the inner harbour is located, as well as facilities of an important basic chemical industrial complex settled since the 1960s. This left bank of the Odiel river forms part of the service area of the Port of Huelva, and consists of marshes, dunes and river beaches that since the industrialisation have suffered serious environmental degradation.

In order to environmentally restore the area and to promote the social use and the integration of the harbour in the city of Huelva, the Port Authority of Huelva is undertaking various actions of social and ecological restoration in a stretch of five kilometres on the left bank of the river Odiel. Such actions are, the environmental restoration of marshes, dunes and beaches deteriorated over four kilometres, and the creation of a river walk of one kilometre in the most deteriorated marshes which are closer to the city of Huelva.

The goals of the project are the following: diversification and conservation of protected habitats and species of high environmental interest, including those on some European red lists; the enhancement of natural resources; the improvement and diversification of the marshes due to the construction of an infrastructure project that connects the city of Huelva and the Port; the stabilisation and restoration of the marshes; erosion control in areas of low marsh; and the provision of environmental information.

After environmental monitoring studies, it is possible to show that the project has restored with great success both, the ecological functions of the marsh ecosystem, and the influx of citizens and tourists to the area. The project budget was €.27 million. 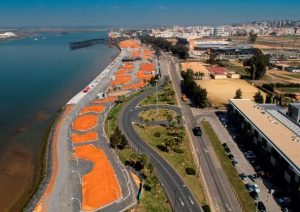 ESPO: What is the innovative environmental added value of the project?

APH: The use of Spartina maritime as the bio-tool for the ecological restoration of degraded and contaminated marshes is a groundbreaking action in Europe. It has also been possible to remove existing invasive species in degraded marshes, including Spartina densiflora, which had spread through the area, displacing native species. The project has also facilitated the restoration and development of a healthy ecosystem of marshes, allowing the creation of habitats for birds and wildlife protected at the European level.

The restored marshes and the river walk are located in the Port area where one of the largest chemical and petrochemical industrial complexes in Spain exists. Therefore, it has been possible to combine environmental restoration, social use and industrial activity within the Port zone.

ESPO: Why do you think your project deserves to win the 2014 ESPO Award?

APH: The Port of Huelva aims to remain one of the principal ports of Europe’s south Atlantic coastline by continuing to be a reference in the hydrocarbon (liquid bulk) and industrial sectors, and by expanding growth in the areas of solid bulks and general cargo and facilitating the traffic and logistics associated with the mining and agricultural-livestock sectors.

It has the largest land area of the Spanish port system, 1, 700 hectares, where coexists one of the major industrial centres of Spain, annex to more than 12, 000 hectares of protected areas of marshes as Natural Park, Biosphere Reserve, RAMSAR sites, and several areas of the Natura 2000 Network designated in application of the Birds Directive and Habitats Directive This is a site of international importance for migratory waders, natural habitats and wild protected fauna and flora. As a matter of fact, it is one of Europe’s most important wildlife areas, and an Important Bird Areas in the marine environment, marine IBAs, of SEO BirdLife (ES261).

In this context, the Port Authority of Huelva makes a significant effort to work on sustainability, developing projects like this, which has also allowed to use with great success technical innovations for ecological restoration and recovery of social, cultural and historical values ​​of the city of Huelva. In this respect, as has been commented, the project implemented by Port Authority of Huelva has recovered successfully the ecological functions of the marsh ecosystem. In addition, this project responds to the demand of the city of Huelva to recover the historical use of the estuary and in this sense, the influx of citizens and tourist to the area is growing significantly as the project comes to an end. That is the reason why we think that the Ecological Restoration of Salt Marshes in the Port of Huelva project deserves to win the 2014 ESPO Award.

ESPO: What are you going to do if you win the Award?Port of Huelva

APH: For the Port Authority of Huelva, ESPO is an institution of reference on key issues for the development of Port, so, for us it would be an honour if ESPO recognised the enormous effort we are making in defence of the port environment on behalf of the society of Huelva.

In this sense, if the Port Authority of Huelva wins the Award, it will share with the city of Huelva the honour of being a recognised European port in the fighting for sustainability, for the ecological conservation, the improvement of the environmental quality in Huelva, as well as for the recovery of historical, social and cultural values for citizens.

The Award should be a strong incentive to keep working for sustainability in a singular setting, where coexistence and co-habitation of ecological, social and economic values​​, is not an end, it is the way forward.

ESPO: Besides having the ESPO Award winner statute, what would the Award further mean to you?

APH: The Award would mean a recognition to the dedication and enthusiasm of a human team that has been working hard and betting strongly for years, to make this project a reality for our port, for our city, for our people.

ESPO: How would you make your experience in developing the project available to others?

APH: The experience in developing in the Port of Huelva is an example that can be used for other salt marshes that suffer a high level of environmental degradation due to invasive species, erosion or pollution.

In fact, the Port Authority of Huelva has just performed the initial studies to monitor the expansion of populations of native vegetation as well as the proliferation of invertebrates, birds and wildlife such as Pandion haliaetus, Lutra lutra, Alcedo atthis, Ardea purpurea, andother species. In addition, it has assessed the contribution of restored marshes on the likes of CO2 capture, sludge consolidation, and the absorption of heavy metals.

In this sense, the Port Authority of Huelva is developing scientific studies that demonstrate the success of the marsh restoration, and accordingly, it has begun new initiatives of restoration in different points along the coast of Huelva.