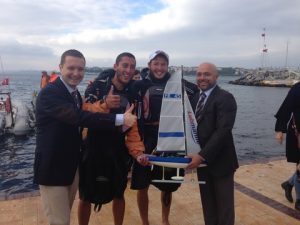 The journey, part of the Mare Nostrum Project, saw Louis Wilmotte and Douglas Couet paddle the whole length of Europe’s Mediterranean coast in a sea kayak carrying out scientific, educational and cultural assignments.

Wilmotte, a 24 year old student who has previously solo kayaked across France and Couet, also 24, and an MSc Oceanography student, collected daily water samples to test for toxic organisms in the Mediterranean Sea. They also used hydrophones to undertake an acoustic study of coastal waters, testing for noise pollution caused by marine traffic and building works. They have also been able to listen to the many marine mammals in the water around them. The samples and recordings collected have been sent to a range of research institutions, including the Oceanographic Observatory of Villefranche-sur-Mer and will be used by scientists to further understanding of marine eco-systems. 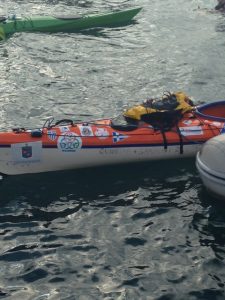 Norbert Schieren, general manager of Total Lubmarine, said: “This has been a fantastic achievement and Total Lubmarine is delighted to have sponsored such an innovative endeavour. Louis and Douglas have shown great tenacity and resilience in finishing the 10, 000km trip and the vital research work they have undertaken will help to preserve the Mediterranean’s precious marine ecosystem.”

He added: “They have also been able to speak to hundreds of school children in Mediterranean coastal areas  and explain the Mare Nostrum Project. I am certain their efforts will prove inspirational and ensure  the children take an interest in the preservation of the Med, its ecosystems and creatures.” The adventurous pair visited schools in 12 and engaged pupils on the topics of toxic algae, the role of cetaceans in the Mediterranean and the effect of human noise pollution.

The Mare Nostrum Project began in July 2013 with students Louis Wilmotte and Douglas Couet setting off from the Strait of Gibraltar in a tandem sea kayak with the aim of reaching Istanbul, traversing the coasts of twelve countries along the way and fulfilling scientific, educational and cultural goals. The pair has been working with research institutions including the Oceanographic Observatory of Villefrance-sur-Mer and France’s Centre National de la Recherche Scientifique (CNRS).

Total Lubmarine provides the shipping industry with pioneering marine lubricants and greases. The company is dedicated to engaging in partnership with its customers to provide turnkey solutions to their lubricant needs. A genuinely local partner, with sales and technical support based in over 50 locations globally, Total Lubmarine provides one of the world’s largest network of delivery hubs -supplying to over 1, 000 ports worldwide.
www.lubmarine.com

The Dry markets dive below the 1, 000 points; the wets though…