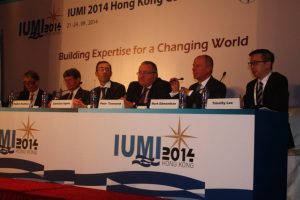 Underwriters have been urged to take a more sophisticated approach to the way they calculate hull and machinery premiums charged to shipowners. Christian Irgens, business intelligence director at the Norwegian Hull Club, said that the traditional method of relying heavily on the record of a fleet had shortcomings: it was statistically irrelevant, “businesswise absurd, ” and underestimated the risk through what he called a myopic focus on “causes” for the good or bad records.

Mr Irgens suggested a three-stage approach by underwriters: Step 1 – a semi-automatic risk assessment to check if the risk is within the scope of the company’s statistical experience and underwriting guidelines; Step 2 – automatic calculation of expected claims cost based on various risk factors, sum insured and deductible; Step 3 – for the quotation, a manual assessment of market price, guided by estimates based on previous written risks and the technical price.

He was speaking during the ocean hull workshop at the 2014 conference of the International Union of Marine Insurance.

On the thorny industry topic of the value of statistical computer models in helping insurers’ pricing calculations, Mr Irgens declared that “all models are wrong but some are nevertheless useful.”

He said: “A model cannot predict next year’s claims for a fleet, but should be able to predict the next few years’ claims of vessel segments (especially segments of expected profitability).”

Underwriters needed portfolio reporting tools to believe in, understand, use and improve models efficiently. “The model does not have to be perfect, but should be better than the competitors’ models!”

He insisted: “Fixing a consistent model is easier than fixing an inconsistent gut-feeling!”

On the critical issue of the attitude of underwriters to vessel age, he asked: “Is age causally irrelevant… but a (good?) proxy for real risk factors?”

Another perspective on using insurance models came from Peter Townsend, head of London marine for Swiss Re Corporate Solutions, who said: “If our level of pricing was somewhere near the model premium, we would not be reporting another [market-wide] loss.” Swiss Re was very model-orientated in its marine work, he said.

How long before hull insurance is treated as a commodity, similar to motor insurance, and decisions are taken out of the hands of underwriters and given to a model, he was asked. Mr Townsend replied: “Looking at the hull book over the last 18 years, if you were to write quota share you would have lost money every year. In order to make a return to our capital providers, I think we need to know our risks, we need to know what we are doing and to be lucky in equal proportions.” A famous golfer had said: “the more you play, the luckier you get.”

Mr Townsend said of the challenges of underwriting: “You only need to look at the exponential increase in the size of vessels. Machines are very good as a tool, but ultimately the decision requires manual information. It is incumbent on every individual and underwriter to do his own research.”

It was also said during the discussion that the motor industry book had a 200% loss ratio over the last 10 years.

Through the conference electronic voting system, the delegates were asked: Do you believe in setting models for hull and machinery premiums? Some 66% replied yes – compared with 71% when the same question was asked at IUMI’s London conference in 2013. Some were alarmed at the implication of the snap survey that reinsurers were supporting the one in every three insurers who did not use such models.