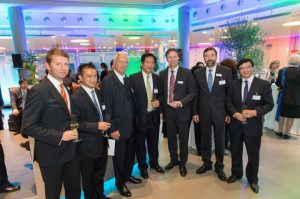 Hamburg, 13th October 2014 – The future of EU–China relations, the country’s investment in Europe as well as sustainable growth and environmental protection in the Chinese economy were just some of the topics on the agenda at the 6th Hamburg Summit last weekend. To foster new relationships and honour key players for their efforts in European–Chinese cooperation, the world’s largest classification society DNV GL hosted a dinner in its global maritime headquarters in Hamburg.

“We are committed to China and will continue to strengthen this commitment in the future. Our vision is to have a global impact for a safe and sustainable future. To achieve this, we need a global collaboration. That is why it is so encouraging to be a part of the Hamburg Summit, ” said Knut Ørbeck-Nilssen,   President Maritime at DNV GL, when he addressed more than 250 dinner guests in the Hafencity.

A common focus on increasing sustainability by using greener energy sources has become an instrumental part of the cooperation between East and West. “Both China and Europe have been at the forefront of setting ambitious goals for renewable energy generation to power a low carbon future. Recently, China decided to make certification of new types of wind turbines mandatory. We have already established a partnership with a Chinese wind turbine blade manufacturer for certification of its products to improve the reliability and quality of blades produced in China, ” Ørbeck-Nilssen explained.

In the maritime sector, there are many joint projects underway as well. Amongst others, DNV GL has just signed an agreement with Sinopacific shipyard for a series of ground-breaking ethane-fuelled carriers, which emit significantly less carbon than diesel-powered vessels. Using liquefied natural gas (LNG) as shipfuel is about to become another integral part of China’s low-carbon strategy, especially in short-sea and river shipping.

Even though balancing sustainable economic growth and environmental protection remains a challenge, Ørbeck-Nilssen stressed that this is achievable: “International regulations to set higher standards, incentives for the industry to become cleaner, a level playing field, as well as global collaboration will play a crucial role in tackling this issue, ” Ørbeck-Nilssen emphasized during a panel discussion with delegates from Ansteel Group, Minmetals Corporation, Siemens and Roland Berger Strategy Consultants.

“China and Europe have been seeking exchange and a fruitful relationship for several decades for now. Thanks to the active contribution of many organizations and interest groups the relations between China and Europe have never been closer”, said conference Chairman Nikolaus W. Schües, the former President of Hamburg Chamber of Commerce and the owner of the German shipping company Reederei F. Laeisz. To award its contribution to creating a deeper mutual understanding between China and Europe, Schües presented the “China-Europe Friendship Award” to the China Federation of Industrial Economics (CFIE). The car manufacturer BMW received the “China-Europe Sustainability Award” for its outstanding efforts to follow ecological principles and successfully implemented sustainability in its business strategy and actions.

About the Hamburg summit

The “Hamburg Summit” was created by the Hamburg Chamber of Commerce in 2004 and has grown to be the most relevant Sino-European economic forum internationally. This year it attracted 500 experts from the business, political and academic world, who discussed the state of the Sino-European economic relations – including Chinese Prime Minister Li Keqiang, Martin Schulz, President of the European Parliament, and Dr. Frank-Walter Steinmeier, Minister of Foreign of the Federal Republic of Germany.

DNV GL is the largest classification society in the world and dates back to 1864. Driven by the purpose of safeguarding life, property and the environment, the company enables organizations to advance the safety and sustainability of their business. Operating in more than 100 countries, DNV GL’s 16, 000 professionals are dedicated to helping their customers in the maritime, oil & gas, energy and other industries to make the world safer, smarter and greener. 1, 300 employees are based in China, spread of 36 offices in 20 cities. The first Chinese office opened in 1888 in Xiamen, while the first surveyor already arrived in 1869.

Intermodal Europe 2014: Are you ready to see the future of container shipping?