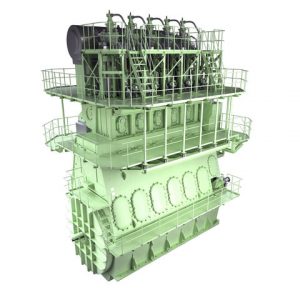 Four two-stroke ME-GI engines ordered for two LNGCs
MAN Diesel & Turbo has received an order for four MAN B&W 5G70ME-GI engines in connection with Daewoo Shipbuilding & Marine Engineering Co.,  Ltd. (DSME) agreeing a deal with the BW Group to build two LNG carriers.
The technical engine specification complies with IMO Tier II, with options to include remedies for Tier III compliance at a later stage. The 173, 400 m3 vessels are scheduled for delivery in late 2017/early 2018 and will be built at DSME’s Okpo shipyard in Geoje, Korea. The deal represents the second LNG ME-GI contract for DSME after a previous order signed in 2012.

MAN Diesel & Turbo has successfully developed two main approaches to
comply with these challenges: Selective Catalytic Reduction (SCR), which
involves the catalytically accelerated reaction of nitrogen oxides with ammonia to form water and nitrogen, and Exhaust Gas Recirculation (EGR), which works by recirculating a portion of an engine’s exhaust gas back to the engine cylinders.

Both methods enable compliance with the most stringent of regulations and
give the customer the flexibility to choose the solution that suits their individual
requirements best, for example, distances travelled within ECA zones as a
percentage of total ship usage, different ownership models or different engine-
operation profiles.

The ME-GI engine
The ME-GI engine represents the culmination of many years’ work and gives
shipowners and operators the option of utilising fuel or gas depending on
relative price and availability, as well as environmental considerations.

The ME-GI uses high-pressure gas injection that allows it to maintain the
numerous positive attributes of MAN B&W low-speed engines that have made
them the default choice of the maritime community.

An ME-LGI counterpart that uses LPG, methanol and other liquid gasses is
also available, and has already been ordered.

The G-type programme
MAN Diesel & Turbo’s G-type programme entered the market in October 2010
with the entry of the G80ME-C9 model. The G-types have designs that follow
the principles of the large-bore, Mark 9 engine series that MAN Diesel & Turbo
introduced in 2006. Their longer stroke reduces engine speed, thereby paving
the way for ship designs with unprecedented high-efficiency.

Such vessels may be more compatible with propellers with larger diameters
than current designs, and facilitate higher efficiencies following adaptation of
the aft-hull design to accommodate a larger propeller. It is estimated that such
new designs offer potential fuel-consumption savings of some 4-7%, and a
similar reduction in CO2 emissions.

In this respect, the fuel savings and performance characteristics for propellers
featuring MAN Diesel & Turbo’s unique Kappel blade design have been well
documented in recent years. Simultaneously, the engine itself can achieve a
high thermal efficiency using the latest engine process parameters and design
features.

As such, the G-type series has revolutionised the marine market. Since its
introduction, close to 900 engines bearing the G-prefix have been ordered
(including, now, 15 × G95 units), representing a total power output of some
15.9 GW. Of these, over 100 G-type engines have already entered service.

About MAN Diesel & Turbo
MAN Diesel & Turbo SE, based in Augsburg, Germany, is the world’s leading provider of large-bore diesel engines and
turbomachinery for marine and stationary applications. It designs two-stroke and four-stroke engines that are manufactured both by the company and by its licensees. The engines have power outputs ranging from 450 kW to 87 MW. MAN Diesel & Turbo also designs and manufactures gas turbines of up to 50 MW, steam turbines of up to 150 MW and compressors with volume flows of up to 1.5 million m³/h and pressures of up to 1, 000 bar. The product range is rounded off by turbochargers, propellers, gas
engines and chemical reactors. MAN Diesel & Turbo’s range of goods includes complete marine propulsion systems,
turbomachinery units for the oil & gas as well as the process industries and complete power plant solutions. Customers receive
worldwide after-sales services marketed under the MAN PrimeServ brand. The company employs around 14, 500 staff at more
than 100 international sites, primarily in Germany, Denmark, France, Switzerland, the Czech Republic, India and China. MAN
Diesel & Turbo is a company in the Power Engineering business area of MAN SE.