14 October 2014 – The Shipowners’ Club has released its half yearly results as at 20th August for the 2014/15 year, and reports a strong underwriting performance with a significant increase in free reserves over the same period last year.

The decision to withdraw from the Pacific North West fishing sector, taken last year, has resulted in a loss of premium income but is expected to have a positive effect on the underwriting result. Despite this, gross earned premium is ahead of the 2013 figure at the half year stage, and underlying organic growth remains strong.

Reinsurance costs have grown in recent years but the enhanced ‘stop loss’ cover that the Club now has with Swiss Re will mitigate future claims exposure. Despite one large casualty, claims activity in the first half has been relatively modest, with fewer high value claims and fewer claims overall.

There is a small underwriting surplus in the first six months of the policy year itself but there has also been improvement on prior years to produce a combined ratio of 95.5% at the half way stage. The Club’s investments have resulted in a return on capital of 2.2% at the half year and an overall surplus of US$15.3 million has been added to free reserves which now total US$314.1 million.

Commenting on the results, Chief Executive Charles Hume said, “The Club remains in a strong financial position and our Board has decided that there should be no general increase applied to premiums for next year. In addition, we will absorb any increase in reinsurance costs; we will continue with our policy of not applying any adjustments for reinsurance at a later stage. For our pooled membership, we maintain our policy of no additional or release calls. We thank our Members and their brokers for their continued support and the trust that they place in the Club. We remain committed to them and to the smaller and specialist vessel sector. However, we are aware that some 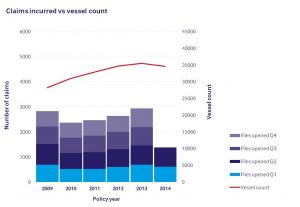