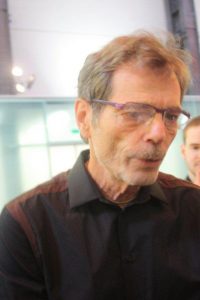 Richard Tuttle is as impressive in his persona as a gentle philosopher as he is as producer of teasing, textile works of art. For, as he says, a mind is a woven thread.

Alongside a large-scale sculptural commission for Tate Modern’s monumental Turbine Hall, and a retrospective of smaller works at the Whitechapel Gallery, the artist could not resist appending metaphysical messages to each exhibit to exercise the mind of the viewer as well as the visual senses.

The ensemble goes under the title I Don’t Know. The Weave of Textile Language but Richard Tuttle has the spoken habit of initial diffidence that quickly and loquaciously blooms into memorable aphorisms tempered by his sentimentality and sensibility to the human condition. 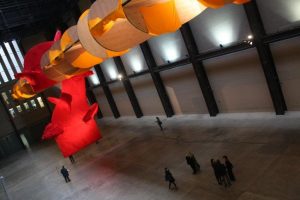 For a start, although he has worked in a range of mediums he sees fabric as the archetypal material through which we can look at the evolution of industrialisation and capitalism. He is quick to point out that the words text and textile share a linguistic root: both textile and language can give clarity to our understanding of the world.

“I am using fabrics as somebody else might use paint, ” he says. “Most of my pieces are making space, not taking space.” 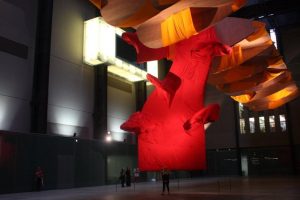 He was asked by one interviewer how he came to be interested in fabrics, surely not the thing for a boy growing up in the 1940s, it was put to him. He sorted his way through to an answer: “My work is gender free: to work out a gender, as a reference point you have to have a place in the world which is free of gender.”

Space-is-Concrete (5), (2005). Acrylic and graphite on spun plastic with Golden (R) black gesso. By Richard Tuttle A.

One of his preoccupations is “genocides” – he says that his ambition to be an air pilot slammed to a halt when he was assigned to push buttons to drop bombs on villages in Vietnam. To avoid that “crazy” mission he says that he wrote the wrong answers in intelligence tests, and was briefly consigned to a psychiatric ward – where he observed human-to-human violence among patients.

Most of his labelling of works has a poetic quality – for example, “who would you follow? A thread emerging so gracefully into the future, or a piece of cloth bogged down in mystery?” and “one little thread can hold two enormous pieces of cloth together.”

Whitechapel curator Magnus af Petersens said: “Richard is very much involved in the experience of art, not the idea of art, ” and he quoted a friend of the artist as saying: “Richard’s art is beautiful and fragile, like this world.”

Everyday materials of cloth, paper, rope and plywood are cobbled together rickety and raggedy constructions, a brightly coloured one since October 13 dominating the Tate’s 3, 300 sq m gallery that was once the turbine hall of Bankside Power Station.

The largest work created by the artist, 24 m long and 12 m high, it brings together a group of specially-made fabrics, 2, 500 sq m of it from textile mills in Surat, India, combining brightly coloured natural and man-made fibres. Resembling from a certain angle a couple of Archimedes screws, the finished product is suspended from the ceiling as a sculptural form, its freeform lines contrasting with the solid industrial architecture of the Turbine Hall.

The Turbine Hall commission is one of the top accolades in contemporary art and has previously hosted Ai Weiwei who filled the space with millions of ceramic sunflower seeds, Carsten Höller who installed a helter-skelter, and the late Louise Bourgeois who sculpted a giant steel spider.

At the other extreme of scale is a work at the Whitechapel entitled 3rd rope piece which was produced 40 years ago (at a time when others were making large pop art works) with minimal components of a small length of cord and three nails, “a slight gesture but alone on the wall.”

Born in New Jersey, Richard Tuttle lives and works in Maine, New Mexico and New York. He has been prominent in his field since the 1960s, combining sculpture, painting, poetry and drawing. He makes the point that although textiles are commonly associated with craft and fashion, what lies behind many of the world’s most acclaimed works of art and textiles is woven canvas.

A book has been published as part of the project, drawing on Tuttle’s knowledge as a longstanding collector of textiles. It has contributions by the artist and new essays by Mr af Petersens and Achim Borchardt-Hume, head of exhibitions at Tate Modern. It is published at £24.99 by Tate Publishing in association with the Whitechapel Gallery.

Richard Tuttle: I Don’t Know. The Weave of Textile Language, is at Whitechapel Gallery, London E1 until December 14 2014.www.whitechapelgallery.org. The installation will remain at Tate Modern, Bankside, London SE1 until April 6 2015.www.tate.org.uk

Continuation of captions of the last three pictures: