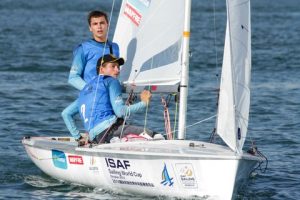 Thursday 16 October 2014 – It was a light wind day at ISAF Sailing World Cup Qingdao with many ups and downs across the six fleets competing on the Beijing 2008 Olympic waters.

After a short early afternoon delay the sailors headed out onto the water with a shifty breeze and strong current that would once again test them to the max.

Home nation sailors Mengxi Wei and Yani Xu (CHN) have been head and shoulders above the rest in the Women’s 470 across five completed races. The Chinese pair were bang on form again on the third day of the competition in the single Women’s 470 race.

With a great start Wei and Xu took the lead from the off. At the first mark they held a five second advantage over Ai Kondo Yoshida and Miho Yoshioka (JPN). The Chinese leaders slowly extended the gap to 11 seconds at the end of the first downwind. The Japanese pair kept Wei and Xu within their sights but pushed a little too hard and received a penalty that relegated them down the pack. After racing a disappointed Kondo said, “The current was very strong and close to the shore. It was really difficult for racing and I got a penalty. The wind was down and difficult today.” 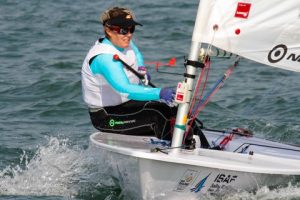 Whilst Wei and Xu had lost the Japanese pair they had new company. China’s Shasha Chen and Haiyan Gao managed to read the conditions well and moved up from tenth to second. However Wei and Xu showed their strength and took the bullet ahead of Chen and Gao.

Wei and Xu sit pretty at the top of the pack on five points whilst three points separates Xiaomei Xu and Ping Zhang (CHN), Chen and Gao and Japan’s Kondo and Yoshioka.

There were several big up and downs in the single Men’s 470 race as the current made life tough. The fleet of 17 were forced to sail above the layline to take the current into account. Several teams read the situation well and flourished whilst others fell back in a game of snakes and ladders.

Henrique Haddad and Bruno Bethlem (BRA) took their chances and rounded the first mark ahead of South Africa’s Asenathi Jim and Roger Hudson who just missed the layline. The Brazilians were able to extend their advantage as the race played eventually taking the bullet.

Behind them the fleet were up and down. Panagiotis Mantis and Pavlos Kagialis (GRE) and Jordi Xammar and Joan Herp (ESP) held a joint lead coming into the day. There was very little separating the teams early on in the race but the Greeks were penalised and dropped down the pack eventually finishing 14th, which they discard.

Xammar and Herp were more fortunate and worked their way to a solid second which Xammar explained at the end of the day, “Well it was a difficult race. We are very happy with our result. Going into tomorrow we are first and we are really happy. It was really hard racing, a lot of current, a lot of changes in pressure and shifts.

“We had to really concentrate and watch the next mark all the time to see the pressure. We were a bit lucky but we managed to finish second.”

The young Spaniards hold the lead on nine points. Mantis and Kagialis are second on 13 points whilst Pavel Sozykin and Denis Gribanov (RUS) maintain third overall.

An intriguing battle is developing within the Laser Radial with small margins separating the top four sailors.

Zhang displayed excellent tactical nous in the light winds at the 2013 edition of the regatta and she thrived in the conditions on the third day of the 2014 regatta, taking the bullet by eight seconds over Croatia’s Ana Zelic.

Zhang has a four point lead over Tatiana Drozdovskaya (BLR), Tina Mihelic (CRO) and Sara Winther (NZL) who are all tied on 13 points. With three races scheduled on the penultimate day much can change with ISAF Sailing World Cup Qingdao honours on the line.

Tonci Stipanovic (CRO) is the Laser master of Qingdao’s light winds and strong current. The Croatian picked up his fourth bullet of the regatta in the only Laser race and holds a six point lead over Pavlos Kontides (CYP) heading into the penultimate day. 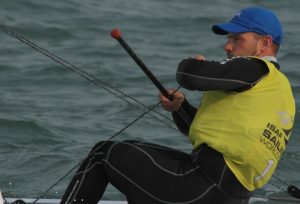 Byron Kokkalanis (GRE) continues to lead the Men’s RS:X despite a less than convincing day in the lighter breeze. The Greek sailor’s overnight 16 point lead was reduced to 11 points following a fifth and a discarded ninth.

Aichen Wang (CHN) enjoyed one of his best days of racing posting a bullet and a third to subsequently reduce Kokkalanis’ advantage. Max Oberemko (RUS) remains third overall but Michael Cheng (HKG) is piling on the pressure as he sits just four points behind.

Olga Maslivets (RUS) Women’s RS:X lead stands at nearly 20 points heading into penultimate day. With a redress of 4.4 points and a fifth she is on 19.4 points. Jiali Sun (CHN) stole the day with a light wind master class. Many Chinese sailors are known for being strong in the lighter breeze and Sun exemplified that by taking a bullet and a second. As a result she moves to second overall, sitting on 37 points.

Racing is scheduled to commence at 12:00 local time on Friday 17 October.

Video
Rights free news feeds containing interviews and b-roll of sailing action will be available from Wednesday 15 October through to Saturday 18 October on the ISAF FTP. A log Sheet will be attached.

In addition, fully-produced highlight packages will be available from 15-18 October. These will contain interviews, action and results, including event graphics.

For specific requests please contact the ISAF Communications department below.