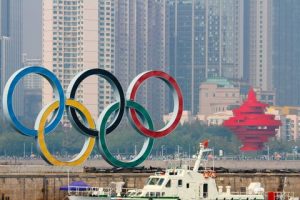 17 October 2014 – Issued on behalf of ISAF – The Beijing 2008 Olympic legacy lives on at the venue of the Olympic Sailing Competition, Qingdao.

ISAF Sailing World Cup Qingdao is just one of many events that see the eyes of the sailing world shift focus on China. Clipper Round the World Yacht Race, Qingdao International Sailing Week, Qingdao International Marine Festival, the Extreme Sailing Series and the Volvo Ocean Race have all passed through the venue, highlighting the sport to the local community and across China.

But it was all a different story before the Olympic Games were awarded to Beijing in 2001.

Before development on the Qingdao Olympic Sailing Centre began in advance of Beijing 2008 the site of the Beihai dockyard wasn’t the bustling metropolis it now is.

Real estate was down and business was far from booming but the level soon rose to Olympic proportions when Qingdao was selected as the sailing venue for the Beijing 2008 Olympic Sailing Competition.

Covering 45 hectares and built at a cost of almost half a billion US dollars, including the re-siting of the old shipyard, the Qingdao Olympic Sailing Center was purposely built for the Olympic Games and included an Olympic village, athletes’ centre, administrative centre, large media centre and a logistics block.

With pre-event infrastructure in place the Beijing 2008 Olympic Sailing Competition did not fail to disappoint, delivering a memorable competition that is now remembered in China’s sailing capital as the legacy of what happened continues to flourish.

The site is now fully open, fully operational and is China’s sailing hub.

What once housed the 400 athletes from 62 countries during Beijing 2008 is now a luxury hotel, welcoming businesses and tourists on a daily basis whilst the former administrative centre houses marine offices on the top floor with the rest used as a hotel. In the wake of the Olympic Games the Qingdao International Yacht Club was formed and they moved in to the media centre, which is still used as the media centre for all international events that pass through Qingdao.

The building work that stopped for Beijing 2008 quickly resumed post Games and development continued to rise.

Jobs were created for local people who got into the sailing industry. Sail makers, boat builders, sailing administrators, sailing instructors and many more fields of specialism came out of the Olympic Games to ensure the legacy was fulfilled.

Olympic sailors saw Qingdao rise from the moment it was selected as venue for Beijing 2008 and they continue to head to the city.

As a host nation sailor Wang Aichen saw the venue and sport grow first hand. “This historic port city transformed itself into one of the world’s leading sailing destinations, ” commented Wang. “It was amazing to see athletes from all over the world come to Qingdao and experience the new sailing village, the atmosphere and the unique racing. Since 2008 Qingdao has become Asia’s leading sailing venue and hosts international competitions throughout the year. It’s becoming a leader in the future of sailing and continues to develop.”

Kontides was a fresh faced 19-year-old at Beijing 2008 and having sailed at the 2013 edition of World Cup Qingdao he liked the transition from Games time to post-Games and is back for more in 2014, “It’s always good memories from the Olympic Games, ” said the Cypriot who won silver at the London 2012 Olympic Games.

“We had the Intercontinental Hotel as our Athletes’ Village and it was just sailors. There was really a lot of space for boats and each country had a lot of space for its boat. We had a huge space. At the back there was space for the containers and now there are things like Haagen Dazs and Starbucks.

“You can see how it’s become a commercial marina as a lot of people have access and why not? This is what it’s all about, you hold an Olympic event in your city and then develop the sport and you can see more and more people are getting into sailing in China and that’s really encouraging.”

Maslivets is back in Qingdao for the first time since Beijing 2008 and like her friends and rivals she loves the place, “The city has changed, the Olympic village has changed and they’ve built lots of new things. Qingdao is wonderful. It’s a city from the future. Every time you spend time in one place you put a piece of soul in it and it’s always nice to visit it again and see how it changed.”

Moving forward Qingdao has plans in place to continue to develop sailing within the city. With world class facilities it will no doubt continue to attract large scale events that will in turn see the futuristic city continue to rise up.