Helmepa, Greece: Month of Positive Action for the Marine Environment 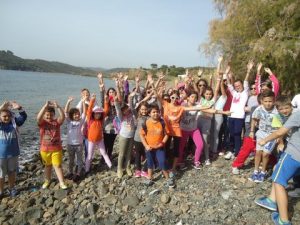 The “Month of Positive Action for the Marine Environment” announced by HELMEPA within the framework of the 2014 International Coastal Cleanup campaign, came to a successful close on 20 October. The initiative drew the participation of scores of volunteers from schools, municipal and port authorities, companies, local stakeholders and associations throughout all of Greece. 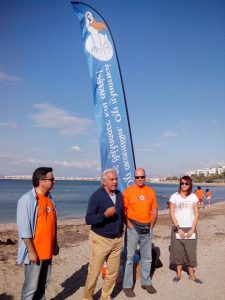 The Mayor of Palaio Faliro, K. Hatzidakis, and the Ambassador to Turkey in Athens welcome volunteers

According to the data collected to date, approximately 6, 500 volunteers, young and old, took part in beach and underwater cleanups coordinated across over 140 regions throughout the country. HELMEPA will publish the detailed findings of the recording of litter by volunteers in November.

On Friday, 17 October, students and teachers from the 9th Primary School of Mytilene completed a cleanup of Charamidas Beach and were impressed by the fact that the majority of the items collected in 40 large garbage bags were recyclable materials, such as plastic bottles.

On Sunday, 19 October, staff members of the Turkish Embassy in Athens together with their families voluntarily cleared Edem Beach at Palaio Faliro of its trash. Mayor of the municipality of Palaio Faliro, Mr K. Hatzidakis, welcomed the volunteers and warmly thanked them for demonstrating their voluntary spirit, referring to the obligation we all have to maintain our beaches in pristine condition. During his brief address, the Ambassador of the Republic of Turkey to Athens, Mr Kerim Uras, highlighted the significance of volunteering for the protection of the marine environment and thanked the Municipality of Palaio Faliro and HELMEPA for their collaboration. In total, volunteers amassed a total of 14 large bags of recyclable material, which were collected by a special vehicle provided by the Hellenic Recovery Recycling Corporation (HE.R.R.Co.).

In parallel, on the same day, at the Port of Marathos in Messinia, children-members of the “HELMEPA Junior” Program, together with their volunteer teachers from the Gargaliani Kindergarten, cleaned up their local area from its litter. They also designed a stylish eco poster made from discarded bits of paper and newspapers, towards better awareness-raising throughout their community. HELMEPA presented special commemorative certificates of participation to all children who participated in all the cleanups as well as to the coordinators of each activity.

HELMEPA wholeheartedly congratulates all those volunteers, local stakeholders, companies and the educational community, who with their widespread participation in this year’s Campaign, sent a powerful message of collaboration towards “Clean Seas and Beaches”.