The Marine Environment Protection Committee (MEPC) of the International Maritime Organization (IMO) met for its 67th session from 13 to 17 October 2014, at IMO Headquarters in London.
Third IMO GHG Study 2014 approved
The MEPC approved the Third IMO GHG Study 2014 providing updated estimates for greenhouse gas emissions from ships.
The Third IMO GHG Study 2014 estimates that international shipping emitted 796 million tonnes of carbon dioxide (CO2) in 2012, against 885 million tonnes in 2007.  This represented 2.2% of the global emissions of CO2 in 2012, against 2.8% in 2007.
However, the “business as usual” scenarios continue to indicate that those emissions are likely to grow by between 50% and 250% in the period to 2050, depending on future economic and energy developments. 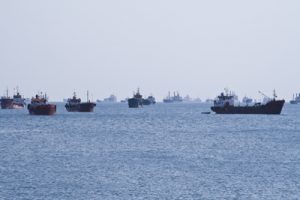 IMO in 2011 adopted mandatory measures to address energy efficiency of international shipping, which entered into force on 1 January 2013 under Chapter 4 of MARPOL Annex VI. These Regulations on energy efficiency for ships, make mandatory the Energy Efficiency Design Index (EEDI), for new ships, and the Ship Energy Efficiency Management Plan (SEEMP) for all ships.
The MEPC continued its work on further developing guidelines to support the uniform implementation of the regulations on energy-efficiency for ships.  During the session, the MEPC adopted the 2014 Guidelines on survey and certification of the Energy Efficiency Design Index (EEDI), updating the previous version to include, for example, identification of the primary fuel for the calculation of the attained EEDI for ships fitted with dual-fuel engines using LNG and liquid fuel oil.
The MEPC also adopted amendments to the 2013 Interim Guidelines for determining minimum propulsion power to maintain the manoeuvrability of ships in adverse conditions, to make the guidelines applicable to phase 1 (starting 1 January 2015) of the EEDI requirements.
A correspondence group was established to review the status of technological developments relevant to implementing phase 2 of the EEDI regulatory framework.  Regulation 21.6 of MARPOL Annex VI requires, at the beginning of phase 1, the Organization to “review the status of technological developments and, if proven necessary, amend the time periods, the EEDI reference line parameters for relevant ship types and reduction rates set out in this regulation”.
Data collection system for fuel consumption of ships
The MEPC agreed, in principle, to develop a data collection system for ships and, having agreed on the general description of the data collection system for fuel consumption of ships, agreed to the re-establishment of an intersessional correspondence group to develop full language for the data collection system for fuel consumption that can be readily used for voluntary or mandatory application of the system. The core elements of the data collection system include: data collection by ships, flag State functions in relation to data collection and establishment of a centralized database by the Organization.
Correspondence group instructed to continue with sulphur review methodology
The MEPC reviewed a progress report from the correspondence group which had been instructed to develop a draft framework for a methodology to examine whether sufficient fuel meeting the requirements set out in regulation 14 (Sulphur Oxides (SOx) and Particulate Matter) of MARPOL Annex VI is likely to be available by the effective date of those requirements, taking into account the global market supply and demand for fuel oil, trends in fuel oil markets, and any other relevant issues.
The group had developed a preliminary draft methodology framework and was instructed to continue its work and submit a final report to MEPC 68.
The sulphur content (expressed in terms of % m/m – that is, by weight) of fuel oil used on board ships is required to be a maximum of 3.50% m/m (outside an Emission Control Area (ECA)), falling to 0.50% m/m on and after 1 January 2020. Depending on the outcome of the review, to be completed by 2018, as to the availability of compliant fuel oil, this requirement could be deferred to 1 January 2025.
Within ECAs, the sulphur content of fuel oil (expressed in terms of % m/m: that is, by weight) must be no more than 1.00% m/m; falling to 0.10% m/m on and after 1 January 2015.
Fuel oil quality proposals discussed
Following discussion on fuel oil quality, a correspondence group was established to develop draft guidance on quality-assurance for fuel oil delivered for use on board ships and to consider the adequacy of the current legal framework in MARPOL Annex VI in relation to fuel oil quality.  The group will report to MEPC 68.
Draft Polar Code environmental provisions approved
The MEPC approved the preamble, introduction and part II (environmental requirements) of the proposed draft mandatory International Code for ships operating in polar waters (Polar Code), and the associated MARPOL amendments to make the relevant parts of the Code mandatory. They will now be put forward for adoption at the next session.  (See Briefing 32/2014)
BWM resolutions adopted
The MEPC adopted resolutions aimed at facilitating the entry into force and implementation of the International Convention for the Control and Management of Ships’ Ballast Water and Sediments (BWM Convention), 2004. (SeeBriefing 33/2014)
Amendments to MARPOL adopted
The MEPC adopted amendments to:
• MARPOL Annex I regulation 43 concerning special requirements for the use or carriage of oils in the Antarctic area, to prohibit ships from carrying heavy grade oil on board as ballast;
• MARPOL Annex III, concerning the appendix on criteria for the identification of harmful substances in packaged form; and
• MARPOL Annex VI, concerning regulation 2 (Definitions), regulation 13 (Nitrogen Oxides (NOx) and the Supplement to the International Air Pollution Prevention Certificate (IAPP Certificate), in order to include reference to gas as fuel and to gas-fuelled engines.
___

Solidarity from ITF to transport unions impacted by Ebola outbreak