“Toxic ships for Bangladesh”: A TV documentary on German ship owners and their shipbreaking practices 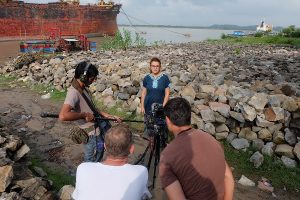 Brussels,  23 October 2014 – A new documentary titled “Giftiger Tankerschrott für Bangladesch – Toxic ships for Bangladesh” will be shown this Sunday on ZDF. It was filmed by a team of the national German TV channel last month in Chittagong, one of the world’s largest shipbreaking sites. The documentary follows Patrizia Heidegger, Executive Director of the NGO Shipbreaking Platform, and Muhammed Ali Shahin, the Platform’s Bangladesh project coordinator, as they meet with the workers, some of them children, and their families.

The team interviews workers who were injured while dismantling end-of-life ships. Some of them are permanently disabled as a result, and have no other choice but to fight their former employers to get compensation for their injuries and access to proper medical care. The team visits the poorly run hospitals and talks with doctors about the miserable conditions in which they have to provide treatment.

But the documentary goes further: not only does it show the precarious working and living conditions of the shipbreaking workers and their families, it also reveals how German shipping companies are complicit by knowingly selling their old ships to yards that are no more than muddy beaches and where accidents, sometimes fatal, are frequent. Most German ship owners sell their old vessels for the best price – making a handsome profit at the expense of workers’ lives and the environment. The documentary shows the clear link between the irresponsible dumping of German-owned ships in Bangladesh and the deplorable situation on the ground in Chittagong. The journalists also meet a ship owner that has chosen to invest in cleaner and safer ship recycling methods, where workers are trained and aware of the hazardous waste these ships can contain. The documentary thus shows that alternatives to substandard beaching practices are possible.