Development of large container ships – what are the limits?

Economies of scale are the most important factor for container ships in service and the development of new designs. The transportation rate per TEU has driven the trend towards larger vessels and has particularly contributed to the great success of post-Panamax vessels. Today, post-Panamax container ships above 11, 000 TEU have the major share of the total transport volume and slot capacity. Vessels approaching the capacity of 18, 000 TEU are already in operation and several will be delivered during the next 12 months, and the step to 20, 000 TEU is already under development.

In addition to the Panama Canal, the limitations on the draft and length in South America and on the air draft in the Port of New York have a signiicant inluence on the Paciic and Trans-Atlantic trades.

These boundary conditions are a driving factor in that different large container ships have been developed for the Asia–Europe and South America–Europe/Asia trades. Especially on the Asia–Eu- rope trade, ever-larger container ships can be used because up to now there have been no harbour or operational limitations.

Will the trend for ever-larger container vessels continue or is there any limitation from a technical point of view? This question should be discussed in this paper by verifying the limitations of the principal dimensions. 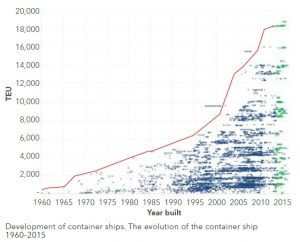 In regard to the ship length, the maximum value quite often men- tioned is 400 m, which results from a former and present require- ment that, for vessels above this length, the actual wave behaviour in sea conditions must be veriied by a direct wave analysis, a requirement which is nowadays no longer an issue.

In the case of container ships, the standardized container box allows clear enlargement steps which result from the container itself, the clearance in the cargo hold, and a typical transverse bulkhead width which all add up to 14.6 m.

Enlarging length inluences the wave bending moment and the still water moment by the power of two. This factor has a signii- cant inluence on the steel plates needed in the upper hull girder of a container ship due to the cross-section as an open u-shape. For 18, 000 TEU ships, the material scantlings are between 80 and
95 mm, where the larger thicknesses are for high tensile steel with a yield strength of 400 N/mm2 and the smaller value is for a yield strength of about 470 N/mm2, both of which are recognized mate- rials. However, there are other criteria, such as the production of thick high-tensile steel plates and Rule requirements for the global strength of the bottom area, which limit the use of the 470 N/mm2 yield strength steel.

Considering a single main engine design of an 18, 000 TEU container ship with four 40´ bays behind the funnel, and eleven 40´ bays between the funnel and deck house, then a practical elongation would be to add one further 40´ bay forward of the engine room, combining the small cargo hold above the engine room to form one cargo hold with two 40’ bays. This arrangement will lead to twenty-ive 40´ bays in the vessel, and a length overall of approximately 414 m, which could still be designed in normal practice. Lengths above this value are possible, but have to follow other cross-section arrangements which must be developed and investigated.

The harbour limitation with regard to the berth length or diameter needed for turning inside the harbour is a factor which should not be underestimated.

Parameter ship breadth
Enlarging the breadth of a vessel had a large impact on the neces- sary main engine power for a fast vessel where speed was a main design parameter in the past. This requirement no longer exists because the maximum design speed has been reduced from 25 knots to 23 or even 22 knots, and this has a large inluence on the opportunity to adjust the length-to-breadth ratio. The possibility of reducing the length of the vessel and enlarging the beam by keeping the same nominal capacity has been used by many yards in present designs. Enlarging the breadth and reducing the length have a positive inluence on the total building costs, a factor which counts in these times of lower newbuilding prices.

Compared to the length, the beam would be enlarged by 2.5 m steps due to the standardized container size including cell guide and clearances. From a strength point of view, the enlargement in width would have only a linear inluence on the wave as well as on the still water bending moment. That means widening a design has a much smaller impact on the global longitudinal strength than elongating the length. Beside this effect, the widening of a longer vessel has a better inluence on the enlarged nominal capacity than an elongation.

However, widening a vessel will have a negative inluence on the so-called warping deformation, which is the deformation of both sides of the vessel in different longitudinal directions. This defor- mation has a large inluence on the hatch cover movements and therefore on the wear and tear of the bearing pads, which leads to maintenance costs or an increase in the number of hatch panels. In addition, the deformation has an inluence on the containers in the cargo hold and the interaction of the containers on the hatch cover with the lashing bridge. To reduce the warping deformations for larger container vessels the deck house has been shifted to the forward area to achieve a closed strength member below the deck house leading to a twin island design. Compared to the elonga- tion of the present designs, widening is the more practical solution from a strength point of view.

The rolling and transverse acceleration forces of container ships depend on the width of the vessel and inluence the permissible loads on the lashing equipment as well as the crew on the bridge deck. This effect has led to increasingly high lashing bridges with only one target – to allow the stowage of heavier containers in higher tiers or reduce the racking loads from the transverse forces during rolling on the lower container. Increasing the vessel’s beam will have an inluence on the loadable containers so that the nomi- nal container intake igure is not comparable to the real container intake figure.

The current limiting factor of some container terminals in regard to the 60-metre gantry crane outreach should be considered when widening present designs – especially on the Asia to Europe trade where large vessels will be deployed – but is not a limiting factor for the vessel itself.

The vessel’s depth depends on the number of containers in the cargo hold, the height of the hatch cover and the space between the top of the container and the lower side of the hatch cover. In addition, a passageway of at least two metres has to be ensured above the upper deck and top of the hatch cover. The height of the container itself, which is today 9’ 6” for a standard 40’ contain- er as well as the usual height for reefer containers, must be taken into consideration. However, the majority of containers in use to- day are still of the 8’ 6” size and the fact that the nominal container capacity of a container ship will be measured in 8’ 6” tall TEUs (twenty-foot equivalent units) is more important. Considering this aspect, there are two possible container arrangements, ten tiers of high cube 9’ 6” containers with a height of 28.96 m or eleven tiers of standard 8´ 6” containers with a height of 28.50 m. This results in a difference of only 459 mm at the side depth, which means that most designs could accommodate ten tiers of high cube in the cargo hold.

According to ISO 1496/1, the lowest container in the hold may be over-stowed by 192 t (based on a maximum vertical acceleration of 1.8 g), which would result in an average container weight of around 31 tons for a 40´ container and 28 tons in the case of eleven tiers, which is equal to the typical 14-ton homogenous loading conditions. Exactly this loading condition is a main contractual item between the shipowner and building yard, so yards and designers are hesitant to enlarge the number of tiers in the cargo hold or the ship depth because then the maximum container load would differ from the maximum 14-ton homogenous loading condition in the cargo hold and would thus lead to a different interpretation.

Although the test load of the container itself has been changed from 86t to 96t since 2005, this does not result in a higher side depth for the vessel unless there is an intermediate stopper for the container stowage in the cargo hold, which is not practical during the loading and unloading of the vessel.

However, by keeping the vessel’s depth and draft and widening the vessel, the additional freeboard will be reduced which could lead to weathertight hatch covers having to be installed – leading to more maintenance work and costs. The ship owner should therefore carefully consider if the large scantling draft is needed
or whether maybe the same deadweight can be achieved by reducing the draft and having a larger block coeficient – an indication of a fatter vessel.

Another aspect of the draft-to-beam ratio is the Suez Canal. The Canal limitations are set by a combination of draft and beam. A draft of 16.8 m would allow for a maximum beam of 60 m, which does not impose any restriction on current designs. However, should the beam increase to 65 m, then the corresponding draft limitation would be 15 m and could thus inluence the lexibility of new designs.

Parameter air draft
The maximum number of containers above the hatch cover is restricted to the container strength, analogue to the depth of the vessel. The major difference is the racking load due to the rolling of the vessel – which does not exist within the cargo hold because of the cell guides. This effect could be compensated by higher lash- ing bridges, which are today up to three tiers, and different stow- age devices. In this respect, the number of tiers on the hatch cover have been step-wise increased to 8, 9 and 10 by the installation of 1-, 2- and 3-tier lashing bridges. It is important that the total stack load can only be slightly enlarged due to the container strength of the lowest container, but the weight distribution in the stack can be inluenced. There are already designs and ships waiting to be delivered that have eleven tiers on the hatch cover. Another factor is that the number of tiers on the hatch cover will enlarge the deck house and therefore the height of the bridge deck. This will have a larger inluence on the transverse acceleration and therefore on the safety of the crew. The installation of protection for the conning
position as used on VLCCs may be necessary.

Port restrictions like the bridges in Osaka, Hong Kong and Hamburg, as well as the air draft limitation below the gantry cranes of some harbours on the Asia to Europe trade, may also be limiting factors for the vessel and must be taken into consideration by the operator.

Conclusion
The request of container liners to operate vessels above 20, 000 TEU exists. However, at present we have to solve technical restric- tions and the main issue is the maximum plate thickness in the upper hull girder. A simpliied elongation or widening of present designs is possible to a certain extent. Further enlargement is
only possible with a different design layout similar to the step from semi-aft deck house design to the twin-island design. Beside this technical restriction the port facilities or canal limitations as mentioned should not be underestimated and be considered for the next steps.