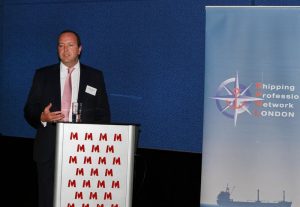 Gearbulk (UK) Ltd (the world’s largest operator of open hatch gantry crane handy size ships) presented on their Graduate Training Programme (for the recent graduates who have started their lives as young shipping professionals, being the new generation of young shipping professionals), and SETEL presenting on the new generation of power line communication technology, which provide communication networks on- board ship. To add to this theme for the evening, John Collins, Private Client Director at Metro Bank, the event hosts (also known as being the first bank to get a banking license in over 100 years), shared the “Metro Bank story” on how they have rewritten the high street bank rules to become the revolutionary ‘new’ high street bank, managing to buck the trend of high street bank consolidation since the global financial crisis by continuing to expand (opening an average one branch per month).

First though were the event sponsors, with Sebastian Moore CEO of SETEL informing attendees of a new generation product just launched in partnership with a company called FGM Marine. Specifically in regards to power line communications, which provide networks on- board ship. “When we came across the power line solution with FGM Marine it was a no brainer – we had to get involved. It is a simple technology with disproportional benefits. It distributes digital signals to the existing electrical systems. It was only two years ago it was developed for shipping.  There is an increased demand from the owners to have real – time fees on engine mentoring performance and OFID checking. The crew are demanding more and more to have internet activity.  They want to be able to walk around with their mobile and get access to social media and communicate.” 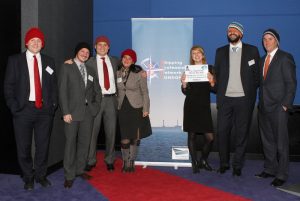 SPNL board members with mission to seafarers

Available to retro fit all of the existing vessels it is also becoming increasing popular to new builds. Sebastian Moore tells us “We have been approached by lots of shipping companies with varying requirements by far the most popular at the moment is Wi-Fi for crew welfare, and CCTV for anti-piracy solutions.  Now you can have it all at once, immediately. Once the heading is fitted all these applications are immediately available to you. “

The platform was then provided to Sara Hay-Jahans, Graduate Program Manager for Gearbulk, with the topic focus being their trail blazing Graduate Training Programme, with the development of the next generation of young shipping professionals being close to SPNL’s central theme of “adding value” to the next generation. Sara Hay-Jahans from Gear bulk (UK) Ltd spoke about Gear bulk’s reasons for introducing a graduate programme “Sustainability is a key priority for us and throughout our strategic plans. It’s very much thinking about the organisation and shipping for the future. Also making sure we have the key skills and key talent coming into the organisation and thinking about how we are training up senior specialists and senior leaders for the future. We need to do this in a very conscious way and that’s how the graduate programme was born.”

The graduate campaign started on the 1st of March and ran for 4-5 weeks; the campaign was targeted as to attract people who would generally be interested in joining Gearbulk and joining shipping.  Sarah tells us “One of our challenges was of course we aim to hire graduates globally and that’s the critical thing. These eight graduates are placed around the globe, in their home countries and they will then move on to international assignments. So we were recruiting in each home nation, we needed to have a consistent process and a consistent criteria. It was a success, we had 336 applicants and we brought 130 through to the video interview stage. 42 were then brought to an assessment centre and we hired 8 graduates on the back of that.  It’s a two year programme and they will undergo intensive training in technical and general management, rotating round branch offices as well as spending time at sea on a Gearbulk vessel, also undertaking language tuition.  They also will be given a mentor for the two years from someone within the business to support them. “

Marc Pauchet from SPNL (who works at Braemar ACM Shipbroking),  thanked all the speakers for the informative presentations and introduced Mission to Seafarers who were taking part in ‘Woolly Hat Day’ in support for the seafarers around the world. Drinks and networking followed after, with all members participating in the charitable Woolly Hat Day cause.