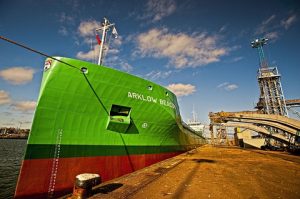 ABP’s Port of Ipswich welcomed the Arklow Beacon on its maiden voyage from a ship yard in the Netherlands.

The cargo ship picked up 7, 000 tonnes of wheat from the region’s farmers en-route to the Portuguese capital of Lisbon.

Roger said “The Port of Ipswich is a vital route to overseas markets for the regions farmers and that’s why the arrival of the Arklow Beacon is so welcome. She represents a major investment in the grain export sector and is a vote of confidence in its bright future. I was proud to welcome her on behalf of the port and the city.”

Ipswich is the UK’s busiest grain export port, handling around 1, 000, 000 tonnes of cereals each year. Ipswich generates £122 million for the regional economy and supports more than 1, 800 local jobs.